How can I automatically classify peaks of signals measured at different positions?

I have microphones measuring sound over time at many different positions in space. The sounds being recorded all originate from the same position in space but due to the different paths from the source point to each microphone; the signal will be (time) shifted and distorted. A priori knowledge has been used to compensate for the time shifts as good as possible but still some time shift exist in the data. The closer the measurement positions are the more similar the signals are.

I am interested in automatically classifying the peaks. By this I mean that I am seeking an algorithm that "looks" at the two microphone signals in the plot below and "recognize" from position and waveform that there are two main sounds and report their time positions:

In order to do this I was planning to do a Chebyshev expansion around each peak and use the vector of Chebyshev coefficients as input to a cluster algorithm (k-means?).

As an example here are parts of the time signals measured at two nearby positions (blue) approximated by 5 term Chebyshev series over 9 samples (red) around two peaks (blue circles): 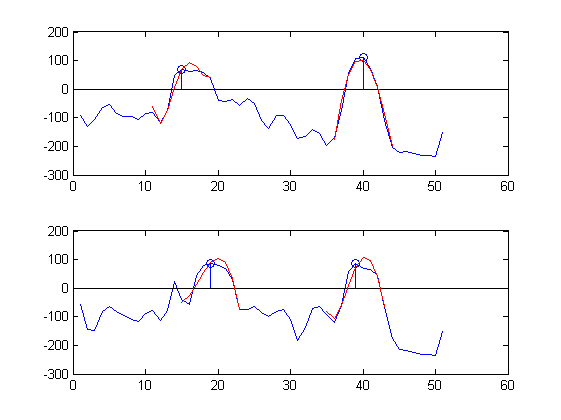 The approximations are quite good :-).

However; the Chebyshev coefficients for the upper plot are:

And the Chebyshev coefficients for the lower plot are:

Maybe there is another orthogonal basis that is more suited in this case?

Any advice on how to proceede (I am using Matlab) ?

Thank in advance for any answers!

It looks like you have a single source, x[n], and multiple microphone signals $y_{i}[n]$. Assuming that your propagation path from the source to the microphones is reasonably linear and time invariant, you and simply model the path as a transfer function. So basically you have $$ y_{i}[n] = h_{i}[n]\ast x[n] $$ where $h_{i}[n]$ is the impulse response of the transfer function from the source to microphone "i". These transfer functions have different amplitude and phase responses. If they are different enough, the individual microphone signals will be quite different as well and there is no reason to believe that the peaks will actually show up at the same spot. In most acoustic environments, they will be "different" if the microphones are more than a quarter wavelength apart for the frequencies of interest (or where there is non-trivial energy in the spectrum).

An alternative would be to combine all mic signals into a beamformer that optimizes pickup from the source but rejects everything else. This should also provide a fairly "clean" version of the source signal.

Not the answer you're looking for? Browse other questions tagged matlab discrete-signals interpolation classification or ask your own question.

4
How can I smoothly interpolate between 2 position?
7
How Can I Detect Peaks and Regions of Highest Variance in a 1D Signal?
3
Removal of noise from vibration recordings
2
Cross-correlation of two signals using matlab
1
how to lower frequency of a sound file in matlab?
0
Implementing an L-System conversion from R2 to R1 for symmetric, square matrices
5
Deconvolving a 1d Signal Using a Lookup Table
1
On discrete fourier coefficient convolution of indivdual periodic signals with different frequencies