How do you find the frequency and amplitude from a DFT? 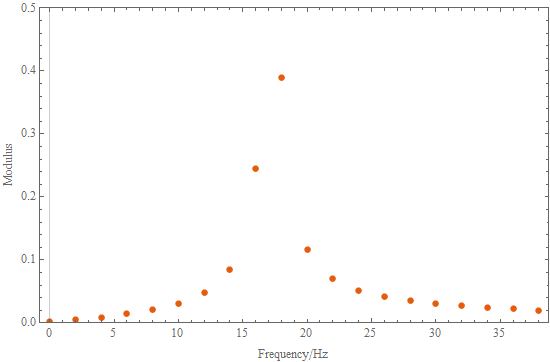 The question is how to get the frequency, amplitude and phase from this plot? This is the typical case where the frequency falls between bins. As there are three unknowns I would imagine you could get the precise values from, say, the three largest points which I call premax, max and postmax. However, complex values are available for all the points so many methods are possible.

If there is noise on the data then some sort of fitting is probably needed depending on the extent of the noise. All suggestions welcome. Thanks

There is an exact analytic formula for the Fourier transform of a sampled sine wave. For my data it plots as 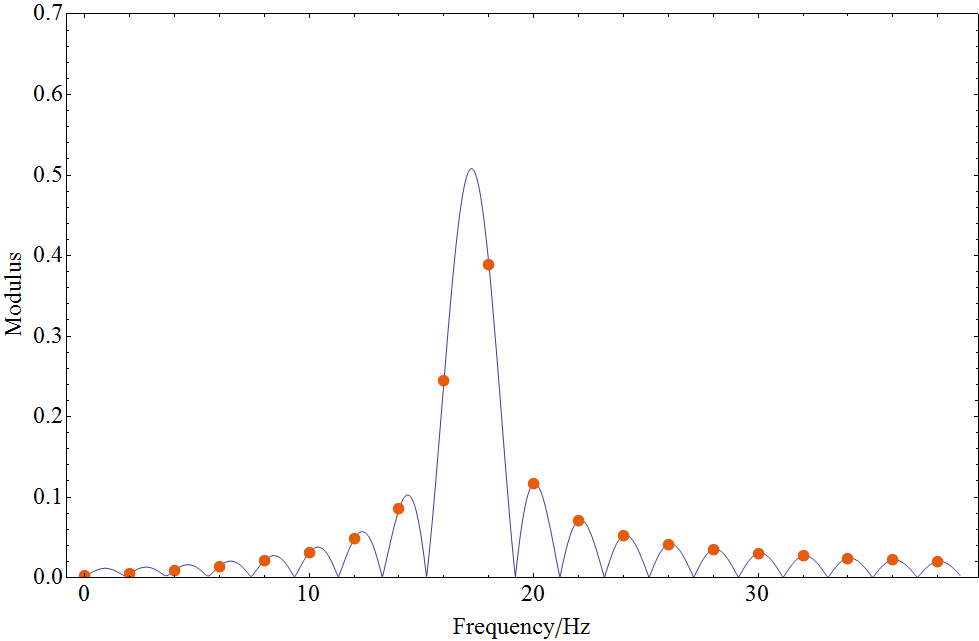 This plot could also be obtained by calculating in-between values for the original data. I also calculated the frequency at the maximum of the analytic curve. To 25 significant figures it is

which is significantly different to value of 17.2 used in the calculation of the time history.

Some of the answers suggest using parabolic interpolation. I show the results of this here

Methods based on time domain analysis look more promising than using Fourier which is disappointing.

You can't get the phase from a DFT magnitude-only plot. For phase you will need an estimator that uses the complex DFT results.

For a higher quality estimate, including a phase estimate, try using windowed-Sinc interpolation of the complex DFT result components, perhaps followed by successive approximation to find a better estimate of the magnitude peak near the peak DFT bin. The quality of the estimate will vary with the width of the window.

Equivalent to Sinc interpolation would be to use a much longer zero-padded DFT or FFT to get more closely spaced frequency points.

There are a few added comments regarding the above frequency estimation methods on my blog: http://www.nicholson.com/rhn/dsp.html#1

The question does not ask about frequency estimators that do not involve a DFT, but note that in zero noise, only 3 or 4 unaliased points are required to solve for 3 unknowns (frequency, magnitude and phase of a pure unmodulated sinusoid). See: http://www.claysturner.com/dsp/3pointfrequency.pdf and http://www.claysturner.com/dsp/4pointfrequency.pdf

Eric Jacobsen has done quite a bit of work on this topic.

Check out his first and second frequency estimation pages.

There are also some algorithms here that may be of interest.

Let me know if any of these are of any interest, and I can elaborate.

Your image shows a magnitude plot of your DFT. This means that for each complex value $Y_k$ of the DFT only $\left|Y_k\right|$ is plotted. Assuming that you actually do get complex values in mathematica, and this is just the way the plotting method operates, here's what you do:
You can obtain the amplitude of a given frequency-value $Y_k$ by taking the absolute $\left|Y_k\right|$. To get the phase, you get the complex argument $\arg{Y_k}$.

Not the answer you're looking for? Browse other questions tagged fourier-transform or ask your own question.

3
FFT method input argument have to be $2^n$ ?
3
Finding the Amplitude of a Sinusoid in Noise
4
Large sample rate or large number of cycles when estimating frequency?

1
How to choose between taking the real part or the absolute value of an inverse discrete Fourier transform?
0
Recover signal from its spectral amplitude and envelope
4
3D wiggle plot for an analytic signal: Heyser corkscrew/spiral
1
Discussion - Integrating Accelerometer data to Position data from Frequency domain FFT
5
Effects of linear interpolation of a time series on its frequency spectrum
1
Why is the size of results from FFT half the size of the input, while that is not the case in image processing?
3
Why zero padding the 2-d DFT interpolates images in spatial domain?
1
DFT and perfect reconstruction of a square wave on a digital computer