I have been using Fourier Transform Power Spectrum for estimating the dominant direction in some images.

However, I am now working on extremely small images of size 8X8 pixel and I have found that even at this level there is some result regarding the dominant orientation of the image. As the image size is 8X8, the total number of pixel will be 64 and as shown in the figure below, there will be less number of angles.

I have simply done polar conversion of the Fourier Transform Power Spectrum of the image which will be of same size (8X8), then I have taken the summation of the intensity for each angle and plotted them against the angle. 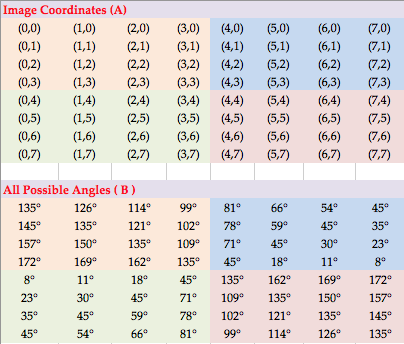 Now, from the plot I can find the maximum angle but I want to increase the accuracy of my result. I will first find the dominant direction of an image (a medical image) and then I will find the changes in the diseased state.

Thank you so much for your help.

If you want to make the computation faster you can take advantage of that the integral will change quite smoothly as function of the angle, so you can first sample at the coarse resolution of at least $\text{atan}(1/8)\times 360\unicode{xb0}/(2\pi) \approx 7\unicode{xb0}$ to find where the highest peak might be, and then sample more finely around that angle.

A few things you need to take care of:

Not the answer you're looking for? Browse other questions tagged image-processing fourier-transform or ask your own question.

4
Calculating an image's fourier spectrum by hand?
0
How do I compute the DC component given the other part of the Fourier spectrum?
1
How can I implement image widowing in my image in Java?
1
Fourier transform of moving image sensor
2
Finding an Image's Orientation With DFT Frequency Amplitudes
3
Understanding 2D FFT result of an image having a pattern
1
Why are edges in spatial images represented as edges in their Fourier transform image?
0
FFT and Power Spectrum Normalization