I am struggling with a problem, and would be happy if you could assist me. I put an accelerometer sensor inside a spherical enclosure, and release it to the water. While it was translating in the flow, I recognized that the enclosure was also wobbling (like a kicked pendulum), which I think that it is likely caused by the inertia of the enclosure. I then added some weight inside the enclosure and observed that the peak was more pronounced. Left panel is the spectra of the acceleration magnitude for three different tests without additional weight (inertia is only described by the sensor + enclosure + battery). 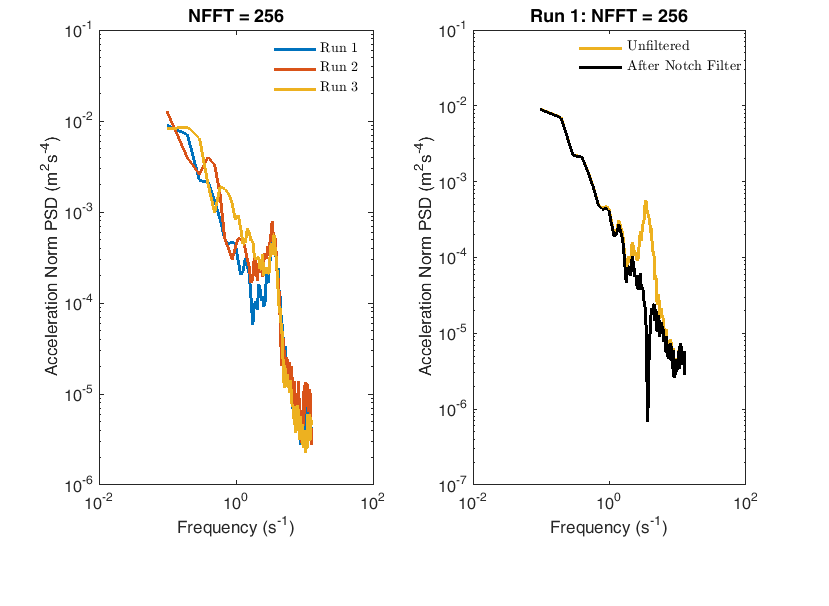 Since the sensor is like a black box (I do not know the mass distribution inside so that I can try to match it with the geometrical center of the enclosure), I would like to find a way to exclude the effect of the wobbling in the signal without disturbing it because the wobbling might also affect the lower frequency part of the signal, as seen in green line in page 118. 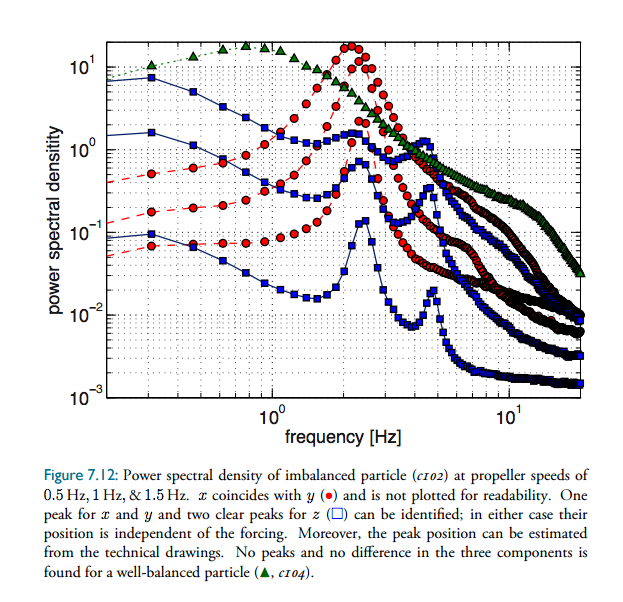 Based on the comment below, I have added the spectra after notch filter. Notch filter does its work very well, and attenuated the signal in the region (2 - 5 Hz), without affecting the rest. However, the oscillations (around 3.5 Hz) likely influences the lower frequency range of the spectra. Is there any quantity that I can derive to see the effect of these oscillations in the lower frequency range or any function that I can try to model the effect of inertia? Any ideas and suggestions would be appreciated.

It sounds like you want to remove the frequency component at about 2.5Hz in the plot, but leave the rest of the plot as untouched as possible.

The usual first approach to that problem is to just use a notch filter:

There are more complex approaches that use, for example, Kalman filtering... but that might require more assumptions about the dynamics of your system that you are prepared to make given your "black box" comments.

Not the answer you're looking for? Browse other questions tagged filters frequency-spectrum or ask your own question.

3
Eliminate Signal A from Signal B
2
Derive velocity and acceleration from position
1
Removing specific frequency from a signal
1
Amplitude calculation of the original signal from its FFT
1
Filtering an acceleration signal
0
How to decompose raw acceleration signals into gravity and dynamic acceleration?
1
FIR filter not eliminating out of band noise?
2
Kalman Filter for position : introducing acceleration estimates