When I apply differerent thresholding, wavelet denosing functions to non stationary time series which has been detrended via Loess regression and demean it. I expect that when this processed series are submited to denoising / thresholding will result in a clean series with smaller values than the submited signal and not to values at any point which are above those of the signal, Is my thinking correct.

E.g. from the (image from wikipedia) 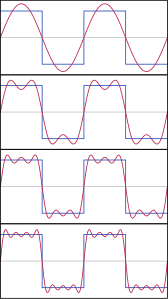 Not the answer you're looking for? Browse other questions tagged signal-analysis continuous-signals or ask your own question.