I need to detect the time window where a 1D-signal is above a certain threshold. If it dips below the threshold briefly I'd like to merge the two windows, if it dips below for a longer time, split them. The data are received digitally as array $S[t]$ with equally-spaced $t$ intervals and represent precipitation forecasts from a weather model. 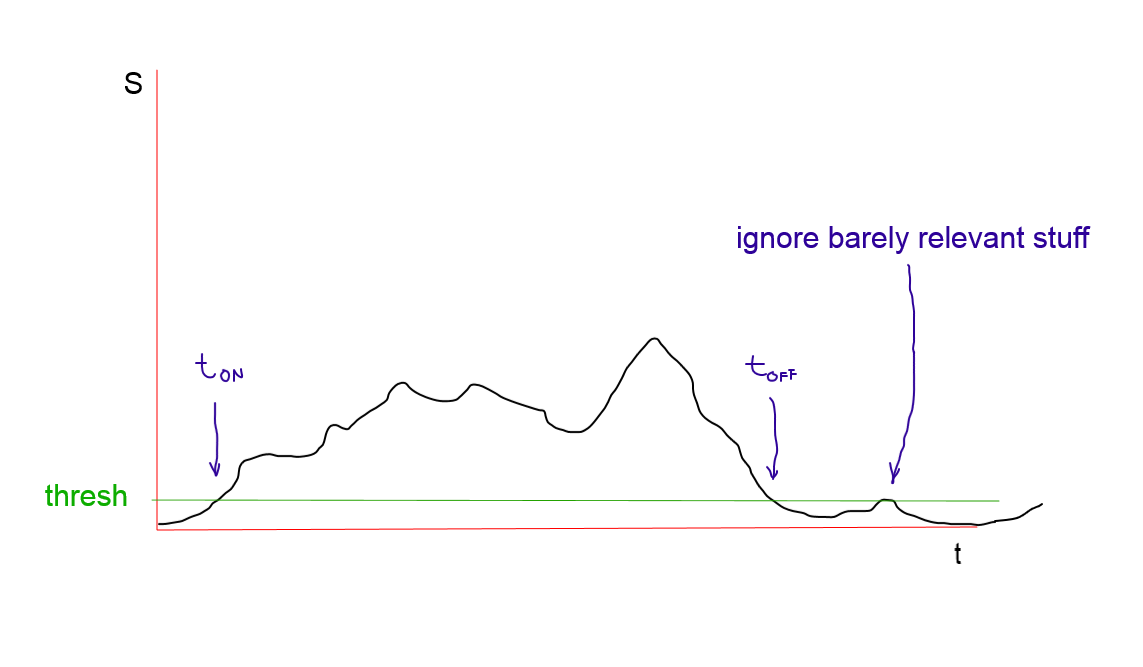 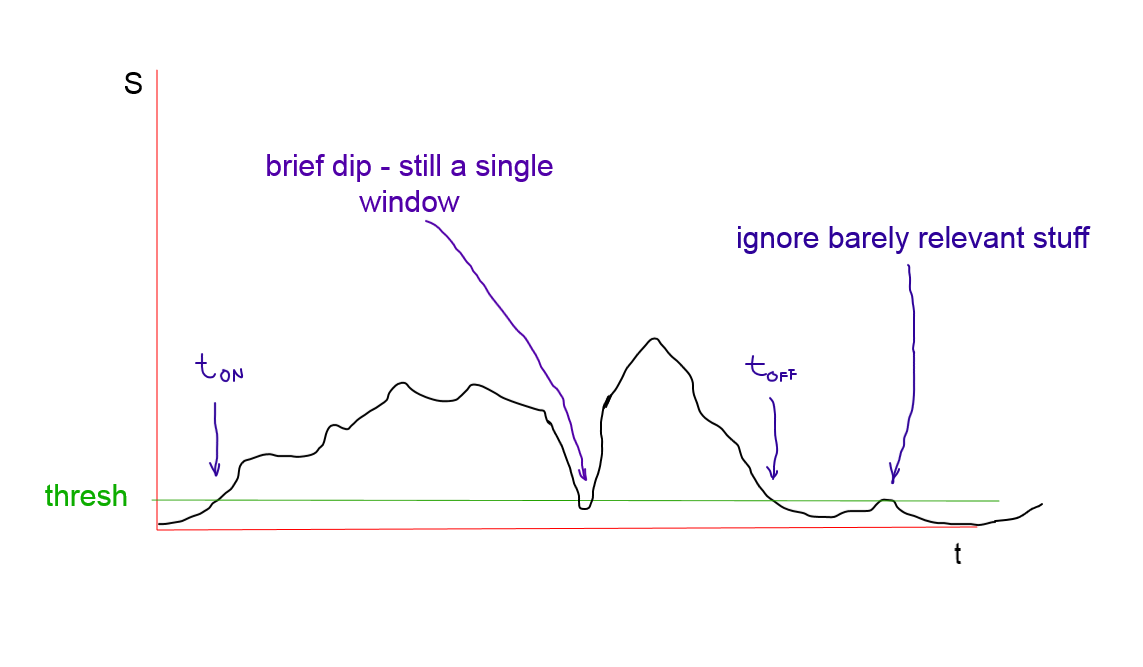 I know this isn't terribly hard and I can probably come up with an algorithm myself, but I thought this is a problem that smarter people than me have already thought about.

The algorithm will be implemented in software and run on general-purpose datacenter servers (no specialised hardware). It doesn't have to be crazy fast, "reasonable" is good enough (we have a few 100k time series to process at once every now and then; each series has probably less then 1000 points).

Edit: Thanks everyone for the great comments and answers. This question really couldn't have turned out much better. What I'm worrying about the most is how to handle pathological cases, like "oscillations" around the threshold. 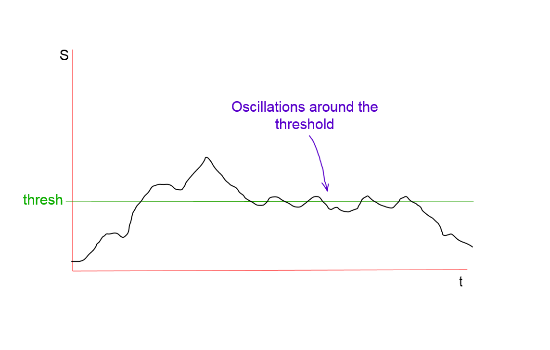 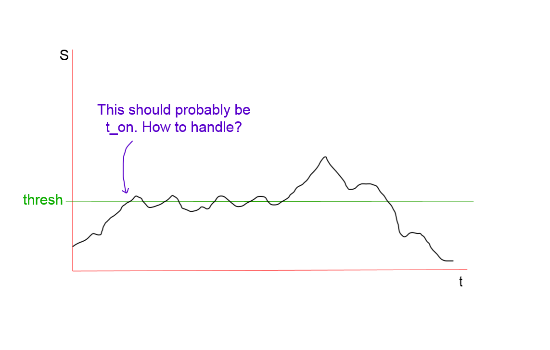 My own idea was having separate on/off-thresholds, with $ thresh_{off} = f * thresh_{on} $ (with $f$ in the range of [0.5, 0.99]). I also really like Marten's idea of temporarily modifying the threshold value after the signal crosses the threshold in a hysteresis-like manner.

Are there other strategies to handle this issue that I should know about?

Are there other potential issues that I need to know about?

There is a book by Basseville and Nikiforov called "Detection of Abrupt Changes : Theory and Application" that they released to the public as a PDF several years ago (it's out of print, now, I believe).

That book looks at the basic CUSUM (cumulative sum) algorithm and how to choose appropriate thresholds for it. 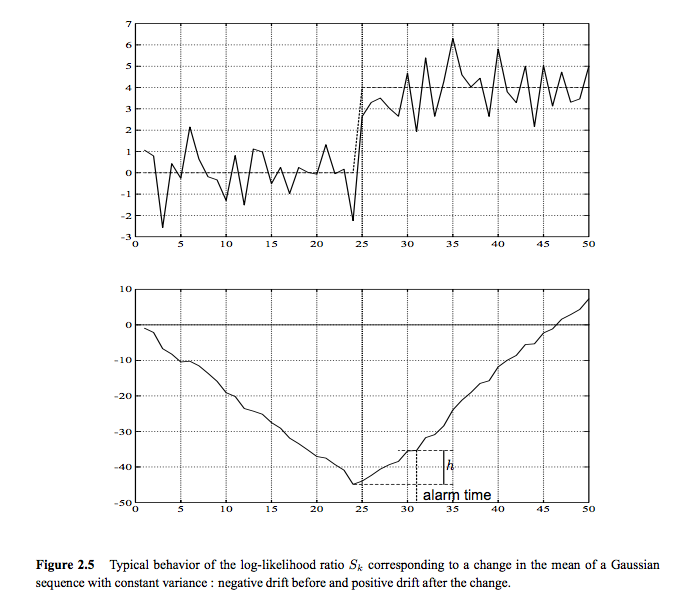 For discarding events where the signal is not very different from the threshold (special case: oscillation), have you considered using a hysteresis?

Whenever the signal drops below the decreased threshold (the $t_{off}$-event), immediately revert the threshold to its original value.

This is a very effective (and often used) way of preventing oscillation and bouncing.

Also, if a peak or dip is very short (shorter than the defined minimum duration), but also very high in amplitude, do you consider it "irrelevant"? This method solves that problem is well.

Edit: To clarify it a bit more, here is one of your pictures that I have added to, to show the hysteresis principle. 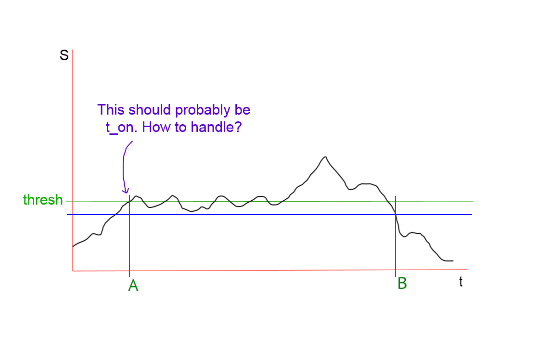 The hard part is to find the proper values of both thresholds. It is perhaps good to even increase the original threshold a bit, to avoid too long 'on'-durations. This totally depends on the system of interest.

Assuming you're working with discrete samples, it seems to me that you must execute two separate tests on your time-domain samples. One test is 'thresholding–in-amplitude' and the other test is 'thresholding–in-time-duration'. Let's assume your complete data sequence contains three wide amplitude peaks that exceed your amplitude threshold. Test# 1 is measuring time instants t_on_1, t_off_1, t_on_2, t_off_2, t_on_3, and t_off_3.

Test#2 is measuring the two "dip" time intervals between your three peaks: dip_1 = (t_on_2 -t_off_1) and dip_2 = (t_on_3 -t_off_2). Then you must determine if either of the two "dip" time intervals is less than some specified time-duration threshold. And if, for example, the "dip" time interval between the 2nd and 3rd peaks is too small (value dip_2 is less than the specified time-duration threshold) then you set t_off_2 = t_off_3 and discard the original measured t_off_2, t_on_3, and t_on_3 values. Finally you can claim your data sequence had only two amplitude peaks. Hope that makes sense.

Not the answer you're looking for? Browse other questions tagged algorithms signal-detection time-series or ask your own question.

27
Calculating the PDF of a waveform from its samples
1
HPS Algorithm for detecting the fundamental frequency of a guitar string
0
Is there a algorithm for detecting bursts in signal?
3
How do I convert a timeseries to a different frequency band?
-1
How to convert the mean and variance of a processed received signal into a SNR or BER?
6
Need a better step detection algorithm
2
wavelet decomposition for time series signal
0
How to programmatically find a sharp change in slope
2
Algorithm for detecting whether a signal stored in rolling buffer is Increasing, Decreasing or staying Constant
0
How can I objectively measure train noise from a sound recording?