I have seen this thread: Difference between Fourier transform and Wavelets

AFAIK there is no common usage of wavelets in the real-time DSP world (excluding image and video processing).

I am curious why is it so?

Where on the other hand Fourier analysis is widely common and all the transmitter/receiver block diagrams that I have seen contains an FFT module in it: 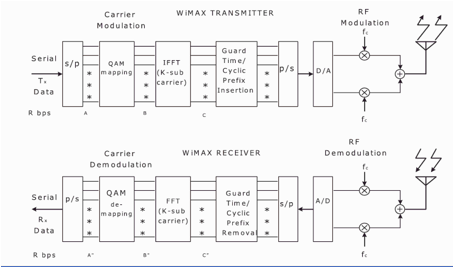 Is it related to runtime complexity issues? I guess not, since Wavelets transform can be formalized as convolution, right?

A radio signal is more or less a continuous signal when observed locally. A constant waveform signal is very sparse when decoded by FFT. So it is very easy and natural to represent an RF signal using the DFT/frequency domain.

One of the common issues one have to deal with in regards to the DFT is spectral leakage. Unfortunately, the wavelet kernels generally have a good amount of spectral leakage also so this issue cannot be improved by using the DWT.

The WT does have some useful properties. Aside from the examples you listed, there are some applications in time series analysis where the WT trumps the DFT. For example, detecting drift of atomic clocks or measuring changes in tides (see Wavelet Methods, by Percival and Walden). Also, a more limited application: the WT can be used for denoising a signal when you want to preserve the spikes as well as the baseline drift (e.g. to visually make a spectrum look cleaner).

In terms of time-frequency analysis, the Gabor wavelet is probably the closest you get to STFT.

Like the DFT/FFT the DWT is an orthogonal transform. However, the continuous wavelet transform (CWT), which is computed using convolution, is not. It's useful as an analysis tool only.

Not the answer you're looking for? Browse other questions tagged fft wavelet or ask your own question.

0
Why does this FFT based signal deliver a sinusoidal result?
1
What does “real time” signal processing mean?
0
Signal processing for undersampled signal
3
Is R suitable for digital signal processing
0
Order Analysis Signal Processing
2
a-weighting signal without digital filter
2
Why do wavelets integrate to 0 and how do they match a signal?
4
Why does FFT output need to conjugate processing?