The slope can be thought of as the expected change of our output variable for a given input variable over a time period equal to the window length. We find that for a short window length, this slope is very low whereas for a long window length the slope is high. We interpret this to mean that the system responds to changes in the input in the long term but not in the short term. To me, that sounds a lot like a low pass filter killing off the fast changes in the input but passing the slower (or rather, more sustained) changes.

Note that I have read this paper which explores using regression beta as a filter but I was unable to get an intuitive understanding of why the larger the window length is, the lower the cutoff frequency appears to be.

Here are a few descriptive charts of our data that might show why we are asking this question: 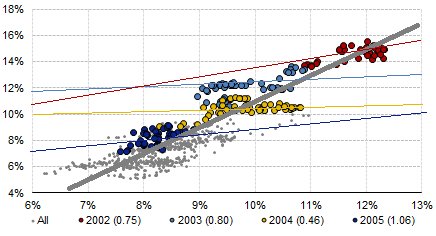 In the chart above, the thick grey line is the regression over all the data (i.e. a long window length) and has a slope of 1.79. The coloured lines (and points) show the regressions for single years of data (the betas for these lines are in the brackets in the legend of the chart). The beta for any individual year is significantly lower than the overall beta. In other words the grey line is much steeper than the other lines. This is true for any arbitrary 1 year window on the data (i.e. there is no year-long window of data that has a slope as steep as the overall data).

This next chart shows the rolling betas for different window lengths: 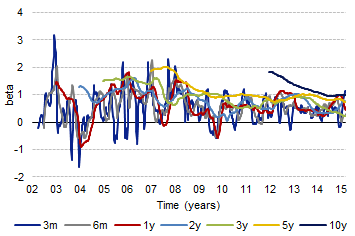 So the question we are trying to answer (and hoping to do so by characterising regression as a LPF) is why do the lines in this chart have higher biases (higher on average) as the window length increases (e.g. the yellow line is higher than the green line). How can we interpret this phenomenon?

This is a statistics question and should not be asked here. But I will try to answer the question as best as I can (it won't be the best answer). First off, I don't see what the phenomenon you are observing has to do with frequency response or LPFs. Low pass filters makes data smoother, which is not what you have. Instead you have a situation, where estimate for one set of data differs greatly from a other set of data. The OLS estimator also is not an MA process, the formula being cov(x,y)/var(x). The filter described in the paper is not a linear time invariant filter.

Indeed, if you regress a line on white noise process or linearly growing process, the regression line should not change slope significantly as more data is gathered. Instead as the amount of data grows you should be more certain of that the coefficient is right, generating greater variance for the rolling process, but on average the slope should be right.

What you have here is not a process that satisfies Gauss Markov assumptions. As can easily be seen the expected value of the error is not zero, and there is heavy auto correlation. This means that the error term is correlated with the independent variable, producing a biased estimate. Besides that the data is not randomly selected.

Most importantly, the data is increasing as a function of time. This generates a so called spurious correlation. Since Y increases faster than X as time passes, the beta becomes upwardly biased. You can model autocorrelation with an MA process, but this is not really important...

I am sure statistics stackexchange (crossvalidated) would provide you with much more mathematically precise answer and a better explanation of what the phenomenon. One thing fix that might help is to difference both of the variables, which changes the autocorrelation structure of the error. This can be equally viewed as a (1-1) MA process applied to both of the variables, which is a comb filter at a high frequency, producing a high pass filter below the nyquist frequency. But the data has such a non-standard structure that I wouldn't be so sure that the fix will help you.

A better way is to use exponential weightings (EWMA).

An even better way of is to use Kalman Filters.

You can find a description on how below:

Not the answer you're looking for? Browse other questions tagged discrete-signals lowpass-filter frequency-response moving-average or ask your own question.

28
What is the cut-off frequency of a moving average filter?

4
Weight vector of an exponential moving average?
6
Regression vector size for prediction, reconstruction and filtration with adaptive filters
0
Can I combine an IIR (an EWMA) with a maximum?
1
Frequency analysis to determine low-pass cut off frequency
0
Calculating filter coefficients of a Moving average with error correction
1
Coefficient weights of Simple Moving Average (SMA) on SMA
0
Is it applicable to implement a cascaded moving average filter with variable window on real-time?