I have a certain signal that has a linear trend that should be removed:

The problem is that the signal needs to be processed in real time(sampling rate is 20Hz). If I only apply the detrending per window of say, 20 samples and then concatenate detrending results, the signal is disrupted.

I wonder if there is some efficient technique to detrend the data per window in real time and then concatenate it so the final signal will make sense? Or should I just detrend every new incoming data with the older data which is far from being efficient.

I would like to note that taking the entire signal and processing it offline using MATLAB's detrend works correctly. The problem occurs when breaking the signal into certain fixed size windows and then applying detrend on each.

I've had success using DC blocking filters to do this.

Below is some scilab code to implement it. Scilab is quite close to matlab (but not quite!). 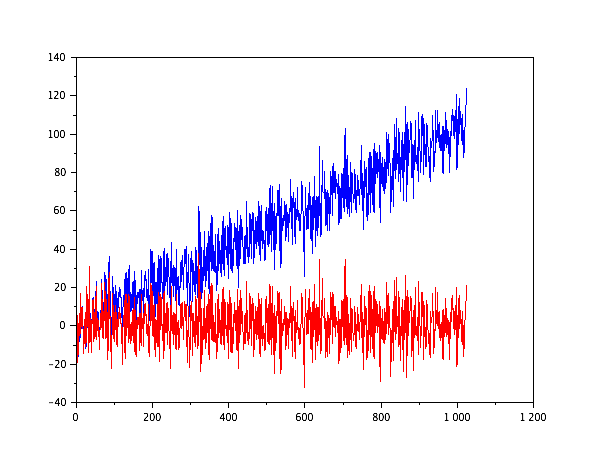 What is the nature of the trend?

If the trend is due to DC drift (perhaps due to the signal acquisition apparatus), you may be able to remove it with a simple high-pass filter around 0.1 - 0.5 Hz. This would eliminate the need for any real-time post-processing.

DC drift gives a slowly rising/falling DC component, such as in the first figure here: 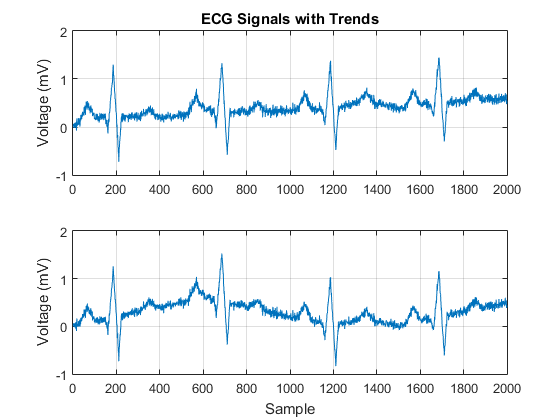 You will end up with an implementation of a local linear regression, also known as LOESS or LOWESS smoothing.

Then you can think of alternatives like the Hodrick–Prescott filters for instance.

Not the answer you're looking for? Browse other questions tagged matlab filters discrete-signals signal-analysis or ask your own question.

0
Bringing the signal into the same level

3
A Simple Lowpass Filter Behaving so Strangely
2
Even after applying a low pass filter, why is there a DC offset?
1
Need critical help: How to detect and distinguish two very similar looking signals?
0
Detecting a specific pop in a real time audio signal
4
Removing step-function like noise from signal, knowing when the step functions occur
1
Apply “non-causal” filter buffer-wise, a.k.a “soft real-time filtering”