There is a recording which contains very noisy voice. (voice with a low Signal-to-Noise ratio).

It is a female voice of a stationary speaker (right in front of the microphone) and there are many other recordings of the same speaker with much better quality.

What can be done to denoise the audio?

From the other recordings, it might be possible to extract statistical values that allow some model to filter the speaker's voice.

Existing questions only address snoring, have non-random noise, want to identify a specific artifact or a moving speaker. The question is-it-possible-to-filter-out-a-persons-voice-out-of-100-of-other-voices is similar, but the answer there lacks details and is more about distinguishing, less about extraction.

Some of the tapes are direct copies, some are copies of copies, which have also been recorded using a lower speed setting (4.75 cm/s). This affected the quality prior to digitalization.

I am afraid there's not much you can do. The voice part seems to have gone through the equivalent of a low pass filter with a cut off of around 1000 Hz. Basically, all of the speech components above 1000Hz are gone.

The filtering action may not have been an intentional filter, but may have been due to the improper biasing of the tape during recording. If it is an old tape, it may simply have deteriorated over time. Also, the playback head may have needed degaussing.

Running it through a high pass flattens the frequency response, but doing so pushes the level down so far it drowns the signal in the noise - no help there.

Your real problem is not the noise, it is the lost frequency range.

This is the spectrum of the bad recording: 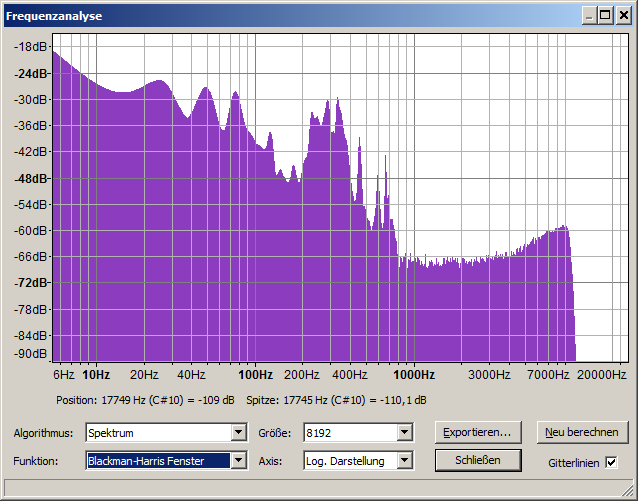 This is the spectrum of the good recording: 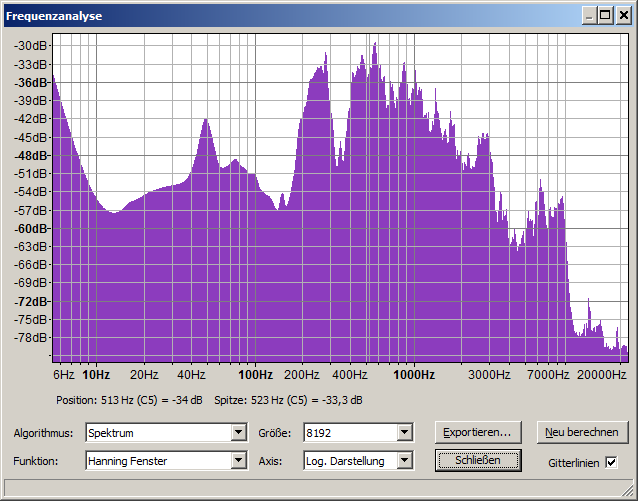 As you can see, there's a lot of stuff missing from the bad recording. So, it isn't simply a problem of removing noise. The problem is that there's stuff that's just GONE.

Look at the range from 1000Hz to 7000Hz. There's lots of stuff there in the good recording, but in the bad one it is just a flat spectrum a good 30dB below the voice peaks aroudn 400Hz.

Some of what's missing might be buried in the noise, but recovering it would cause artifacts that are worse than the noise and muffled sound.

Looking at just the noise, it doesn't seem like there would be much to recover out of it. It looks just like the portions with speech (except for between 160Hz to 1000Hz,) so anything that is in there is going to be buried really deep. 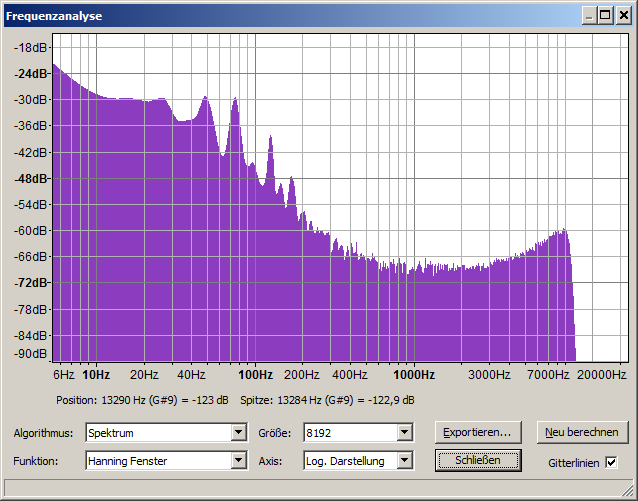 There are definite artifacts, but I fear the source audio is too degraded. Noise aside, the speaker is very muffled and it is hard (esp. not speaking Schwiizertüütsch) to make out anything clearly. High pass filtering, brought out some detail, but again, not enough to be useful.

Thank you very much, to all who provided solutions.

This is a summary of what has been proposed, with an example of what it does to the noisy soundfile when combined. If you like it, please do upvote the originals.

You can listen to the result of all three approaches combined.

22
How to distinguish voice from snoring?
9
How is it possible to Filter out a person's voice out of 100 of other voices?
9
Filter message from noisy voice signal
1
Image datasets used for salient objects?
0
In Search of Voice Activity Detection Algorithms - What happens to the frequency or pitch or speech features as speaker moves away from microphone
1
Filtering voice signal from randomly added frequencies

6
How to recognize patterns in a noisy audio frequency spectrum?
22
How to distinguish voice from snoring?
9
Filter message from noisy voice signal
2
voice recognition
1
Reconstruction of voice from distorted recordings
1
Voice masking for removing voice and not birdsong
1
Given MFCC values for some wav’s, how can I easily tell if all speakers are the same?
1
Adding White Gaussian noise to a voice signal
1
Similar voice features for imitated voice