How to interpret these different Fourier analysis of this audio signal?

This is my first dive in DSP. I would like to familiarize myself with frequency analysis. I have two audio tracks which should be digitized at 16bit-44.1kHz and 24bit-192kHz (music, presented as a 24bit-192kHz sample) respectively.

I wanted to identify the effect of the low-pass filter around the Nyquist frequency (22.05kHz and 96kHz respectively).

Edit: I completely reworked the question.

I basically estimated the power spectral density using Welch's method as implemented by scipy.signal.welch in the Scipy library of the Python programming language.

Basically, I used a script equivalent to:

The power spectral density of the 44.1kHz audio sample: 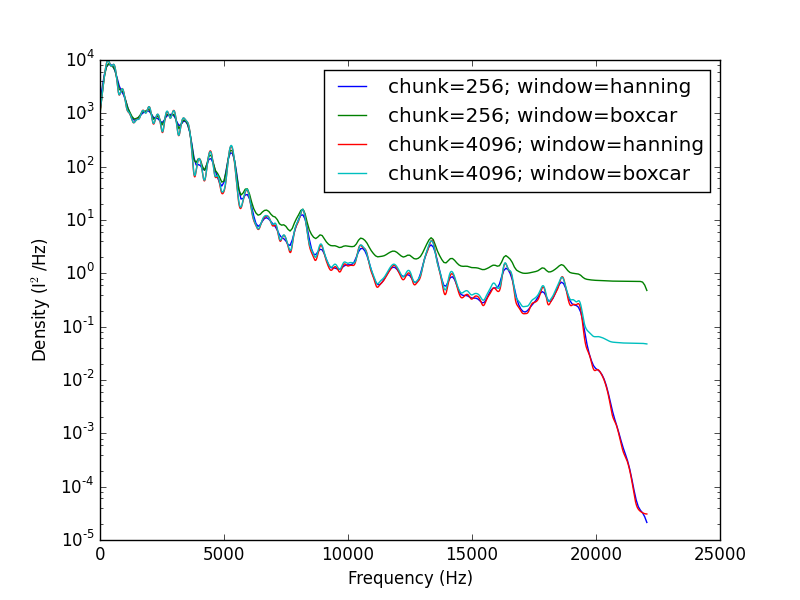 Which is basically just as expected:

The power spectral density of the 192kHz audio sample: 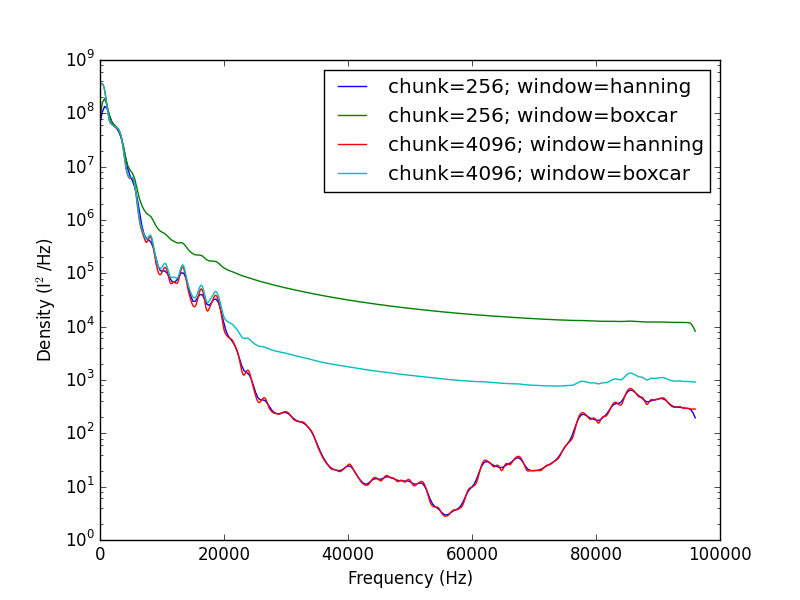 From my interpretation, there is no low-pass filter visible because basically no audio system would go above 192kHz and generally, the software/hardware creator are smart enough to apply a low-pass filter designed with regard to the actual output bandwidth of the audio system.

As for the increasing audio signal above 57kHz, I really can't explain it: the original audio sample is some classical music. I wouldn't expect any instrument to generate louder sounds in that range or frequencies. Any idea? Could this be an example of upsampling?

I don't know for sure if this explains everything but look at the level between your peak signal and the high-frequency components. There is almost 60 dB of rejection there. I've always heard that a good rule of thumb is to get 60 dB of rejection from your filters. I know that's not the full 96 dB offered by 16-bit music, but I bet you'd be hard pressed to actually hear that. Of course, there's the silliness of having music at that sample rate. Humans just can't hear anything above around 20 kHz, give or take. This article gives a good summary of the issues. It also brings up a good point, that that sample rate has the potential to pick up harmonics and other high-frequency distortion caused by equipment and electronics, despite the fact that we can't hear it. Perhaps something like that is going on?

6
Audio fingerprint questions
1
How do I find the power of a specific frequency at a specific sample of a discrete time varying signal?
7
STFT overlap add method - What am i doing wrong?
0
Effect of window function on audio output
5
Understanding audio downsampling code (JavaScript) and adapting to a different ratio
4
Finding notes played in an audio clip
1
Low-Pass Filtering on Small Chunks of Audio
0
Which (Fourier transform?) processing method to use for time variant audio processing? (newbie)
2
Performing Sample-Rate Conversion on Subchunks of an Audio Signal