Here is the formula to compute magnitude of a raised-cosine filter:

I know that 0 <= Beta <= 1. I am not sure what are the values for f (frequency) and Ts. I assume that some normalization will take place. I also know that Ts is symbol period and it is reciprocal of symbol rate. What are these parameters and relationship between them? Can someone provide an example of typical values of these parameters as used in the raised-cosine formula? Here is the graph from Wikipedia. How the normalization of frequency and magnitude is done? 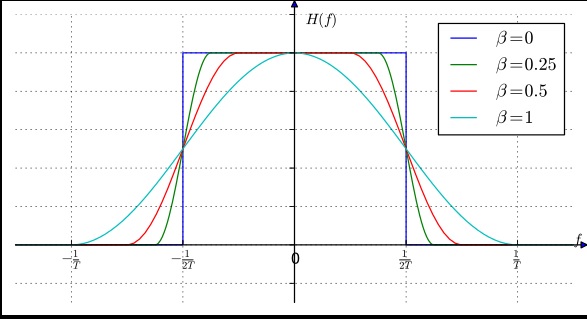 The frequency $f$ is no parameter but it's the independent variable. The frequency response $Z(f)$ is a function of frequency. The only real parameter is $\beta$, defining the excess bandwidth, but you already know that $0\le \beta\le 1$. You also know that $T_s$ is the symbol period, so $1/T_s$ is indeed the baud rate, which is part of the system's specifications.

The frequency $f$ is continuous and takes values between $-\infty$ and $\infty$.

The symbol period $T_s$ can take any value you want, depending on how fast you want to transmit. Note that, if you decrease $T_s$ (you transmit at a higher rate), then $Z(f)$ is non-zero for larger values of $f$; that is, its bandwidth increases.

When $\beta=0$, the pulse is a sinc, which has large sidelobes and decreases slowly. When $\beta=1$, the pulse has very small sidelobes and can be truncated in time, to give it a short duration, with little effect on its bandwidth. Which $\beta$ to use depends on the compromise you're willing to make on complexity (sinc pulses) and bandwidth (large $\beta$).

Not the answer you're looking for? Browse other questions tagged filters dsp-core finite-impulse-response or ask your own question.