How to add white gaussian noise to an image in Matlab?

I want to add white gaussian noise to an image of 10 dB in Matlab.

I tried to use Matlab function imnoise but I couldn't figure out what values for mean and variance should I choose to add noise of 10 dB.

and tell imnoise to add Gaussian white noise with mean 0 and a tenth of that variance:

This is the result: 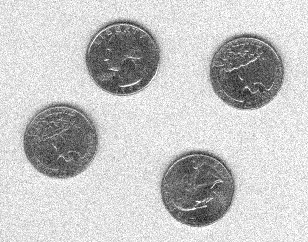 Because imnoise clips the data to the range [0, 1] after adding noise, the actual noise variance is smaller,

use y=wgn(m,n,p) command in matlab. it generates a mxn matrix of white Gaussian noise. p specifies the power of y in decibels relative to a watt.