MATLAB : Proper estimation of weights and how to calculate MSE for QPSK signal for Constant Modulus Algorithm

I had asked conceptual Question about Constant Modulus Algorithm. I am implementing the simple steps of the algorithm, as I do not have the cma() built in module.

I am considering a Finite Impulse Response (FIR) system whose true coefficients are $h = \begin{bmatrix}1 &0.45 &-0.2\end{bmatrix}$. The algorithm is presented briefly :

$u_n$ : Output of the FIR filter that is driven by Input signal, $s$ is a white Gaussian signal that drives an FIR process by the command

We receive a noisy signal which is the output of the system corrupted by AWGN. Let the noise corrupted signal be

The cost function to be minimized by gradient descent is

The weight update equation is given by

Operator $T$ is the transpose and assuming real signals without any imaginary and complex parts.

Below is the code. The algorithm does not give proper result in terms of estimates of the weights.

Problem 1: The Graph for the Mean Square Error (in DB) for the estimated weights returned by the algorithm vs. Signal to Noise Ratio is giving an opposite trend i.e. instead of MSE decreasing with increasing SNR, I am getting the opposite when I re-run the program!! Below is the image of what I mean. The first figure is correct, but with the same code, I ran it again and got the second figure. Why is this & how can I prevent it? 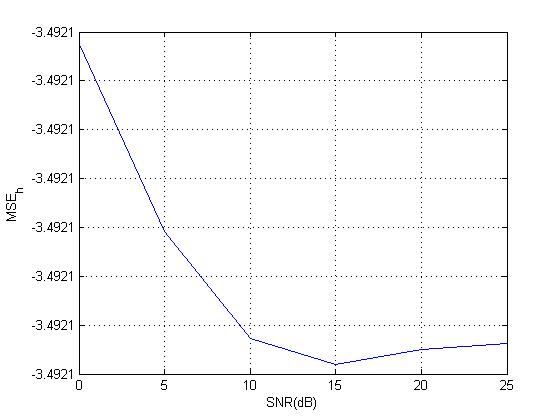 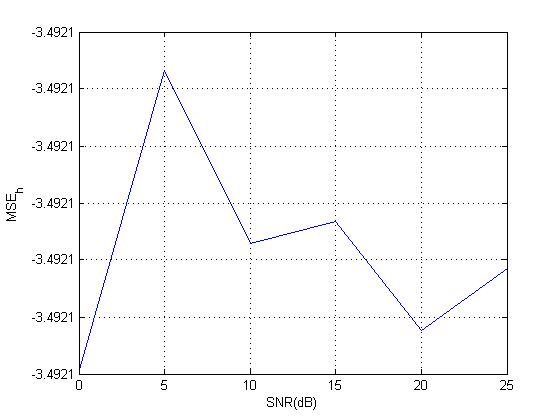 I am not sure if this is due to the initialization of the variable $L$, filter order = number of delays = 2. Somethings are not straight for me which are for the FIR filter of the form : $u(t) = e(t) + 0.45e(t-1) - 0.2e(t-2)$, what is the filter order, smoothing length and the number of weights unknown to be estimated? Can somebody please help so that it works?

Second Problem : The true FIR channel coefficients are not imaginary and have only real parts. But the estimated weights will have both real & imaginary if I work with real and complex representation. How can I properly calculate the weights & its MSE for this case?

Your code reveals many misconception about what the CMA is supposed to achieve:

There are a few other small errors in your code, but instead of correcting them all I show you a very simple and short code example. The figure below the code shows the error curve vs symbol index, and the total impulse response of the channel and the equalizer. As you can see, it approximates a delta impulse (i.e. no distortion). The SNR is $30\,\text{dB}$ for this example. The error becomes much smaller if there is no noise. For worse SNRs, the algorithm becomes unstable. 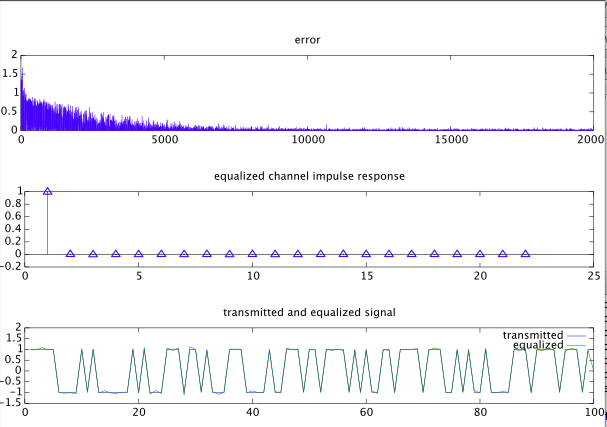 Not the answer you're looking for? Browse other questions tagged matlab digital-communications adaptive-filters equalization adaptive-algorithms or ask your own question.

4
Adaptive equalizer for IIR channel?
4
Constant Modulus Algorithm and the Gradient Operation
2
Help in deriving the update rule for equalizer
1
Matlab: How to apply constant modulus algorithm in wireless communication
4
Matlab: What should be the BER performance for BPSK using Constant Modulus Algorithm equalizer
2
Matlab: What is the proper way to calculate mean square error for complex numbers
1
Implementation of Block LMS
0
Carrier frequency offset estimation for QPSK and asymmetrical spectrum
1
How to choose a fixed adaptation step for decision feedback equalizer