Root Locus for a system

I know this subject tends more to control theory but I am certain its part of the global knowledge basis for engineers, thus I believe I can find the answer here. I'm trying to draw Root Locus for $K<0$, but can't understand how the system behaves.

I have this open loop system:

I know it has no asymptotes, but yet by one of the drawing rules for $k<0$, it tends to $\pm \infty$ in the real axis. How is it possible?

I will denote the given system as, 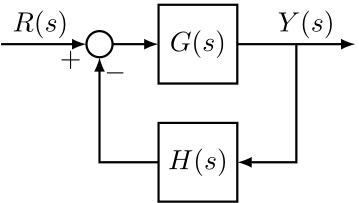 With its transfer function from input to output equal to,

For root locus analysis you want to find the poles of this transfer function as function of $H(s)$. The poles can be found by solving when the denominator is equal to zero. However the denominator (and numerator) are polynomials of $s$, so can't be fractions themselves. In order to ensure this I will slit $G(s)$ up in to two parts, its numerator, $G_n(s)$, and denominator, $G_d(s)$. The same can be done for $H(s)$. The resulting transfer function can then be written as,

The resulting denominator is a second order polynomial, so solving for the poles yields two solutions, which can be simplified to,

Not the answer you're looking for? Browse other questions tagged control-systems or ask your own question.

9
Do we use closed loop or open loop information in Bode plot, Nyquist plot and Root Locus?
2
How to do this root locus by hand?
0
Feedback systems & oscillations
4
Find transfer function from root locus and step response diagram?
3
Why does the control effort increase if the bandwidth of the system is higher then the bandwidth of the plant?
0
Model necessary for PID control
0
How to approximate the transfer function of compensator using root locus?
2
Region of root locus not inside the feasible region for a given performance specification
1
Root Locus, Transfer Functions and Unit Step Response?
0
Part 2: Root Locus, Transfer Functions and Unit Step Response?