What is phase congruency?

I am beginner in Image processing.I am studying the importance of phase in signal.Can anybody explain what is phase congruency ?

Phase congruency is where the phases of a quadrature filter responses at different scales are similar.

Let $u(x)$ be an even function with finite energy, and $v(x) = \mathcal{H}(u)(x)$ be its Hilbert transform. The functions are in quadrature.

Phase is the argument of this complex response $\phi = \arg f_A(x)$ and is separate from the amplitude of the response $A = |f_A(x)|$. Phase describes the shape of the signal at a point - odd or even or somewhere in-between - while amplitude describes the strength. This independence is important as it means signals with different strengths can be compared. 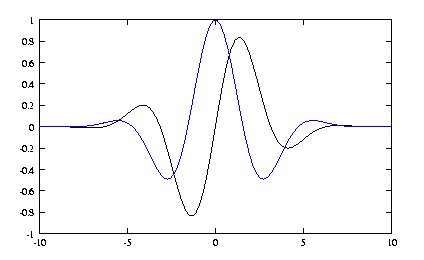 Whereas a random distribution of phases is more likely to result in something that a human would see as uniform noise rather than an edge.

Not the answer you're looking for? Browse other questions tagged image-processing fft signal-analysis computer-vision fourier-transform or ask your own question.

3
What is the Difference between Texture and Image?
1
How are phase values able to capture motion from video?
0
Purpose of Phase Information
3
Is it possible to reconstruct an image using its magnitude only?
8
Phase shift and phase spectrum terms in multidimensional signal
0
Frequency and phase range of the FFT of an image
0
What is Magnitude and Phase actually represents in Fast Fourier Transform?