What is the Sound of a Solution to the Wave Equation?

What is the sound of a solution $y(x,t)$ to the Wave Equation

Here is an example for a string that get plucked at $x_p$ with a displacement of $h$. Its shape is a triangle as follows:

In the following picture, you can see the process of the string starting at $t=0$ 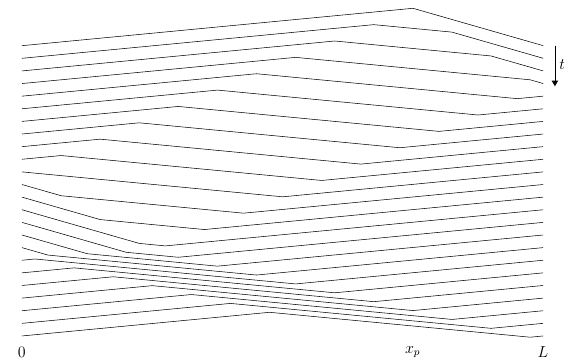 Since you already have the solution to the wave equation, what you need to do now is define a "pick-up" point somewhere along the length of the string (some $x$) and obtain its trace in time, i.e. look at what that specific $x$ value is "doing" across all the $t$ instances that you have. In other words, draw a straight line down your vibrating string diagram and take the vertical displacement of your string at each time point as the amplitude of your sound signal at that time point.

In reality, when you hear an electric instrument you hear exactly that, you hear what the vibrating string is doing exactly above the pick-up coil. Furthermore, electric guitars (and other instruments) have more than one pick-up points along the length of a string and a switch that is used to change the way these pick-up points are combined to offer different qualities of sound. For example, the coil closest to the neck (closest to the middle of the distance between the neck and bridge) produces sound with more low frequencies, while the coil closest to the bridge (the fixed point at the lower end of the instrument) produces sound with more high frequencies. The placement of the coils is a very important issue. Imagine for example what would happen if you placed the coil at a nodal point on the string (when it is excited to produce a standing wave).

Similarly, in acoustic instruments, the sound that reaches the ear is the projection of the vibrating instrument (notice now we are talking about the whole instrument) towards the direction of the ear or microphone. So, in effect, you are still applying this 'slice of vibrating element in time' concept. By the way, this is why mic placement is important when you record acoustic instruments (see for example: http://www.soundonsound.com/sos/1995_articles/sep95/mikinginstruments.html)

Not the answer you're looking for? Browse other questions tagged frequency-spectrum sound wave or ask your own question.

3
time in Sine Wave equation
0
How to amplify sound wave
2
DFT as convolution question
0
Modelling propagation of sound wave by particle simulation
2
Link between LTI systems and square-integrable functions eigenfunctions
1
Mathematical equation for the sound wave that a piano makes
1
How does voice affect a sound wave or its corresponding waveform?
0
What do troughs represent in a sound wave?
2
DFT of pure sinusoidal wave