What are poles and zeros?

The concept of poles and zeros in filters was introduced to me during our lab (our lab isn't sync with our lecture) through the pole-zero plot generation of filters in MATLAB. I didn't get its importance until it was mentioned in our lecture that poles make the equation infinity (or its denominator zero) while the zeros make the roots in the numerator zero. I still can't quite grasp what poles and zeros are. Can someone give an an intuitive and simple explanation on what poles and zeroes are? Much appreciated.

Take the equation b/(x-c) with b non-zero. The ratio goes to infinity as x approaches c. So c is the location of a pole (something tall and pointy in a graph).

Take the equation (x-b)/c with c non-zero. The ratio goes to zero as x gets closer to b. So b is the location of something commonly called "a zero".

You can not only do this with scalar x, but with complex x, thus the domain of the poles and zeros will be on a (complex) plane instead of on a line.

If the ratio represents something about the response of a filter, it might say the filters output is at or near zero when the input is at or near a response "zero". And bad things might start to happen when x gets close to a pole (power supply starts smoking when asked to supply infinite amps, math operations produce NaNs or fixed-point overflows, etc.)

To add to the other good answers, I found the following graphics helpful in gaining a better intuitive understanding, more specifically to the poles and zeros of transfer functions.

(UPDATE: I also just came across this other similar post by @Endolith that is very good: How poles are related to frequency response)

Below is the transfer function of a low pass filter with two poles in the left-half plane, given by the Laplace transform of the filter's impulse response. This is an analog system but equivalent depictions can be done for digital systems in the z-domain instead of s-domain.

On the right is a 3D plot showing the magnitude of X(s) for all values of s on the complex plane. Of interest is that this is the only plot that would result from such a ratio of polynomials, such that we completely described it simply from the pole and zero locations! So every point on this surface is communicated in this case simply from the two pole locations given. 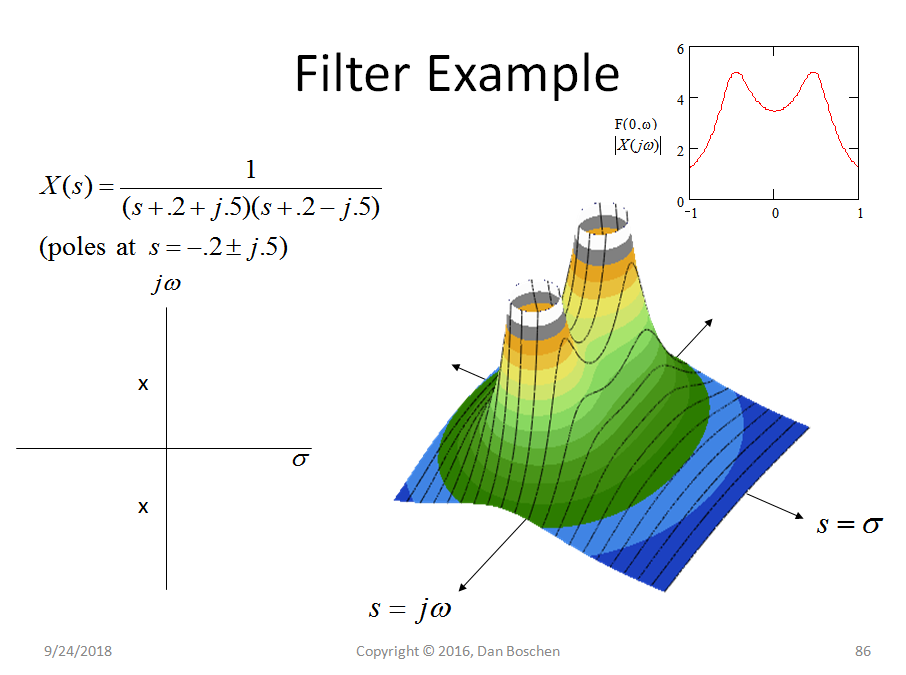 Notably we are often interested in the Frequency Response of a filter or system. s is the input which on the complex plane is allowed to have real and imaginary components. Specifically when s is a has constant imaginary value only, we are describing a constant frequency. Thus a slice along the $j\omega$ axis in the 3D plot shown of all magnitudes would show the magnitude response of the filter, as depicted in the upper right hand corner of the above plot (which is equivalently the magnitude of the Fourier Transform of the filter's impulse response). 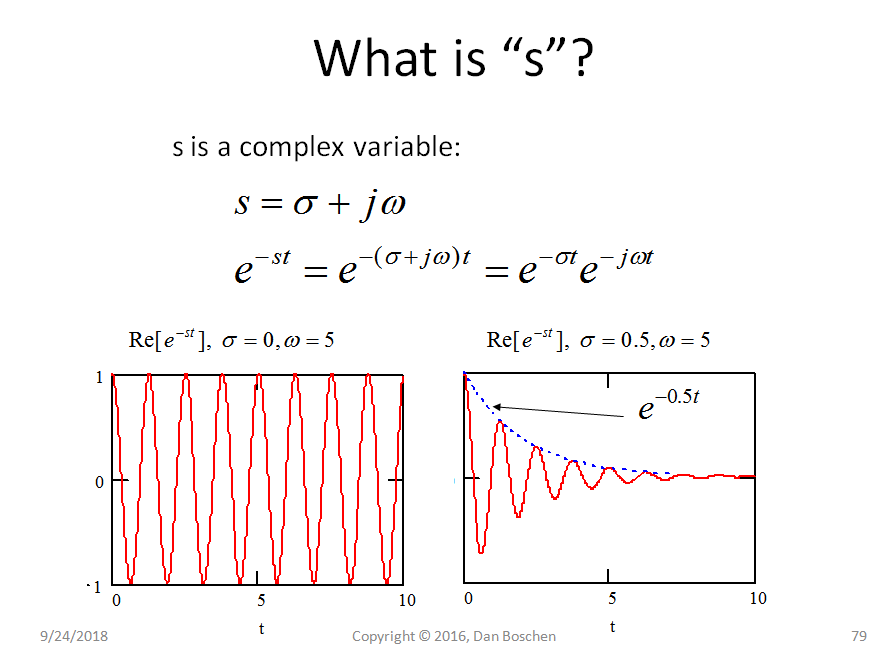 What is not shown in the above 3D graphic is the "Region of Convergence" showing all values of s where the Laplace Transform converges to a finite value depending on if the system is causal or anti-causal.

Second, poles and zeros are used to describe an IIR system, i.e. a system with a feedback.

Zeros are easy: if system has a zero at $z_0$, that means a signal defined by $z_0$ on a z-plane will pass through a feedback loop and sum with itself strictly out-of-phase resulting in zero output. Poles are a bit trickier: if system has a pole at $z_0$, that means a system will generate this signal than it's disturbed and moving freely. Obviously if system has a pole for increasing signal ($|z_0|>1$), it's unstable. When designing a filter, zeros should be placed to suppress undesired frequencies. Poles are placed such that

Not the answer you're looking for? Browse other questions tagged poles-zeros or ask your own question.