I Would like an explanation of the parameters for opencv's HoughCircles function.

I'm new to image processing in general and I have recently started using opencv. I'm struggling to find circles. I obtained the image below by converting a source image to greyscale then performing a binary threshold.

To my eye, the leftmost images are almost perfect circles. I have seen demonstrations where, what I assume are very noisy and distorted circles have been identified by opencv's hough transform. 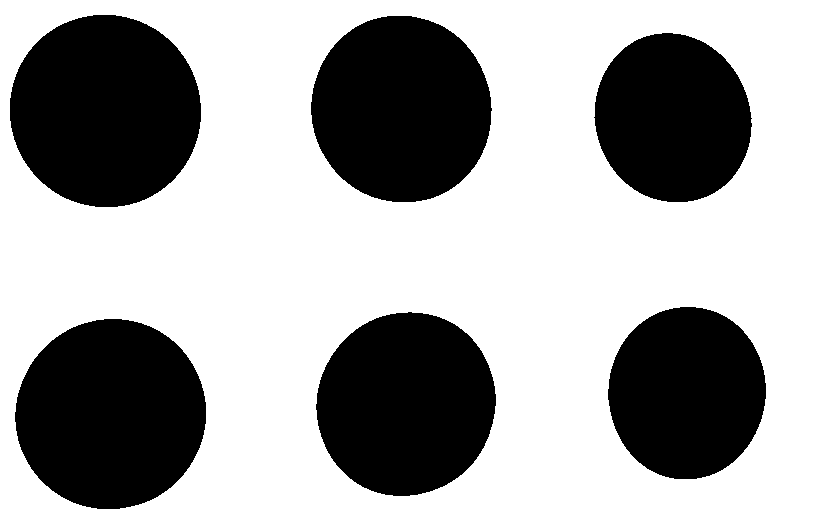 Assuming the image displayed above is saved as "binaryresult.png". If I run the following code I get circles that are poorly placed. I'd like to understand the HoughCircles function's parameters so that I can better detect circles.

The hough transform works by creating a buffer (2 dimensional in our case) which represents all the possible lines in the image.

Any possible line can be represented with those 2 numbers $(\rho, \theta)$

The hough transform scans an image and casts votes into the 2 dimensional buffer corresponding to $(\rho, \theta)$ values.

The buffer slots that accumulate the most votes are likely to be attributed to the presence of a line for that $(\rho, \theta)$ value.

That's the basic idea of the Hough transform but it can get more complicated from here.

For selecting $(\rho, \theta)$ values from the buffer, methods can get more sophisticated, such as using kernel density estimation. Although I don't think opencv does that.

In the case of the Hough circle transform, we now have a 3 dimensional buffer. $(x, y, r)$

Now in practice there's more to making the Hough transform work than this.

Take a look at the source code for the icvHoughCirclesGradient function.

you can see that the function is also doing canny edge detection and sobel filtering.

These operations have their own input parameters which you can also see as inputs to the hough function.

Method: There seems to be only on method now, probably left this for future development

dp: this is the resolution of the votes buffer

min_dist : is the minimum distance between circles (ie: circles that are too close must be part of the same circle)

param1 and param2 are a bit more cryptic

but if you spot the lines

You'll see these are related to the canny edge detection and the accumulator threshold for selecting a circle from votes.

Not the answer you're looking for? Browse other questions tagged image-processing computer-vision opencv hough-transform or ask your own question.

11
how to detect center of a blurry circle with opencv
2
Influence of image size to edge detection in OpenCV
2
In opecv function Hough circles how does parameter 1 and 2 affect circle detection and how can I adjust them to increase accuracy?
1
Optical realization of the Radon Transform
2
How can I isolate a Hough circle that I perceive to be the best fit, but is ranked much lower?
4
blur detection using opencv