What should be considered when selecting a windowing function when smoothing a time series?

If one wants to smooth a time series using a window function such as Hanning, Hamming, Blackman etc., what are the considerations for favouring any one window over another?

Another not so frequently considered factor is the rate of attenuation of the sidelobes, i.e., how fast do the sidelobes die down. 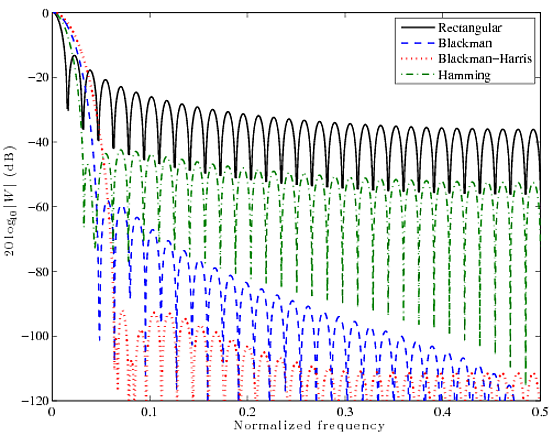 You can see that the rectangular function has a very narrow main lobe, but the side lobes are quite high, at ~13 dB. Other filters have significantly fatter main lobes, but fare much better in the side lobe suppression. In the end, it's all a trade-off. You can't have both, you have to pick one.

So that said, your choice of window function is highly dependent on your specific needs. For instance, if you're trying to separate/identify two signals that are fairly close in frequency, but similar in strength, then you should choose the rectangular, because it will give you the best resolution.

On the other hand, if you're trying to do the same with two different strength signals with differing frequencies, you can easily see how energy from one can leak in through the high sidelobes. In this case, you wouldn't mind one of the fatter main lobes and would trade a slight loss in resolution to be able to estimate their powers more accurately.

In seismic and geophysics, it is common to use Slepian windows (or discrete prolate spheroidal wavefunctions, which are the eigenfunctions of a sinc kernel) to maximize the energy concentrated in the main lobe.

There's a large variety of windows compared in this seminal fred harris paper from 1978:

Well worth a read!

Your question is slightly confusing because smoothing a time series is normally not used in the same context as windowing.

What you probably mean is that windowing a time series has the effect of smoothing (or smearing) the frequency response. You can find a description of the properties of most used windows and design trade-offs in almost any DSP book and wiki covers the topic as well http://en.wikipedia.org/wiki/Window_function. There is one criterion for choosing a window function which I haven't yet seen described in a DSP book in addition to the traditional ones of mainlobe width and sidelobe attenuation and that is computational convenience. For instance, in some applications a Hamming window is preferred because if you FFT a Hamming window you get only 3 non-zero taps!

Not the answer you're looking for? Browse other questions tagged filters window-functions or ask your own question.

26
What are the practically relevant differences between various image resampling methods?
8
How critical is the selection of the window function in STFTs?
2
best window for close frequency components
1
FFT of any sinusoidal signal -- how many point fft to take?
1
STFT - Window Functions

2
How to apply Hamming Window?
1
What is the cause of slow roll off of windowed filters
3
How to calculate resolution of DFT with Hamming/Hann window?
2
How is a signal multiplied with the window functions?
0
Zero Meaning a Hamming Window in Matlab
1
Find Magnitude of a DFT signal using a Blackman window
2
gaussian window for designing filters in DSP
0
Impact of STFT window function and FFT length on computation time