I need to build a Quran app and I want to read out the verses when a user touches it. The problem I'm facing is that some verses may expand to one and half lines (highlighted red verse) or just fit in a quarter of a line (highlighted green verse). So adding each verse to textview or some other view wont work it seems.

I want to detect verses like the red ones in the second image. I have audio files for the verses so no need of text to speech conversion 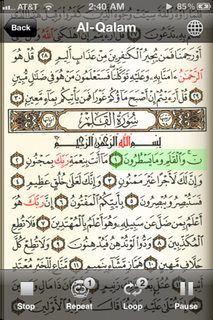 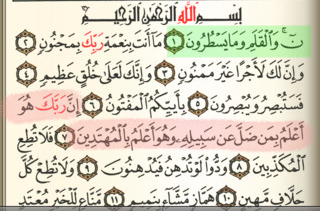 This can be solved fairly straightforwardly with simple template matching. I don't know exactly how you have it set up, so I'll just describe the algorithm generally and use illustrations.

I didn't put this forward as the first solution because you seemed to reject a similar idea in the comments. In the end, it depends on your constraints — would you rather do computational work (template matching — which, by the way, also requires you to store the template) or using memory (storing coordinates).

If I were you, I'd probably go with this one, but the image processing solution can be fun to try.

Not the answer you're looking for? Browse other questions tagged image-processing text-recognition or ask your own question.

1
How can I identify Arabic letters in an image using Java?
5
detecting "deformed" lines
2
Detecting lines with houghlines in matlab
4
Base line detection of text lines
1
Re sizing and thresholding small font scanned Arabic words
0
Comparing two colored lines
2
How can I isolate a Hough circle that I perceive to be the best fit, but is ranked much lower?
2
Algo Name: Detecting Elongated Shape in 2D Image by Convolution with Directed Lines