How do you calculate spectral flatness from an FFT?

Ok, the spectral flatness (also called Wiener entropy) is defined as the ratio of the geometric mean of a spectrum to its arithmetic mean.

Wikipedia and other references say the power spectrum. Isn't that the square of the Fourier transform? The FFT produces an "amplitude spectrum" and then you square that to get a "power spectrum"?

Basically what I want to know is, if spectrum = abs(fft(signal)), which of these is correct?

Wikipedia's definition seems to use the magnitude directly:

When the input a is a time-domain signal and A = fft(a), np.abs(A) is its amplitude spectrum and np.abs(A)**2 is its power spectrum.

This source agrees about the definition of "power spectrum" and calls it $S_{f}(\omega)$:

This source defines Wiener entropy in terms of $S(f)$.

But I don't see the squaring in equations like this, which seems to be based on the magnitude spectrum:

Likewise, another source defines the spectral flatness in terms of the power spectrum, but then uses the magnitude of the FFT bins directly, which would seem to conflict with the above definition of "power spectrum".

The most authoritative reference I can come up with is from Jayant & Noll, Digital Coding Of Waveforms, (c) Bell Telephone Laboratories, Incorporated 1984, published by Prentice-Hall, Inc.

On page 57, they define the spectral flatness: 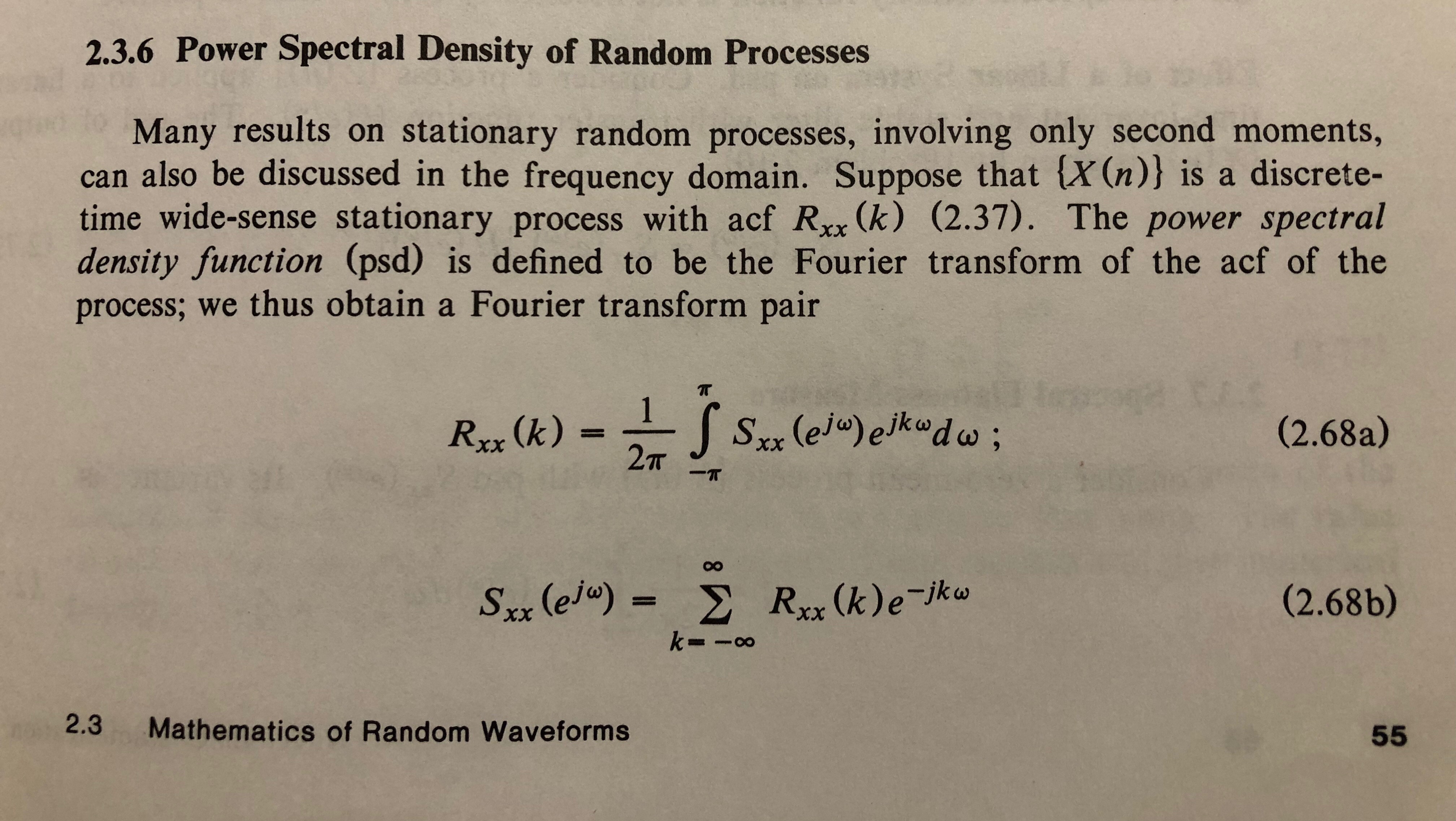 So the FFT-squared version is the one you want.

It looks like Makhoul & Wolf, Linear Prediction and the Spectral Analysis of Speech, Bolt, Beranek, and Newman, Inc. Technical Report, 1972 is also available.

And it has the same definition:

If the definition of the flatness dictates that you use a power spectrum, then yes, you should square the magnitudes as the reference from the SciPy documentation indicates. In the equation that you referenced where you didn't see a squaring, I don't think you can read much into it; it says that

but I don't see a definition for $a_k$ anywhere. If you want the spectrum to be proportional to the power in each bin, you need to square.

Its a good question, one that I was wondering myself as well. The spectral flatness (also known as Weiner Entropy) is simply a measure of the 'peakiness' of a vector.

This source seems to indicate that the vector under consideration is the power spectral density, in which case you have to square. If you square the magnitude spectrum, you are accentuating peaks over the case where you don't square obviously, and I think this also makes more intuitive sense.

Not the answer you're looking for? Browse other questions tagged fft frequency-spectrum power-spectral-density or ask your own question.