How to intuitively understand the state space formulation of discrete time system?

The SS formulation of DT system is given by

Note: T is the sampling period and often omited

How can this model be used to describe the state occurring at all times?

Let me start by answering your last question

How can this model be used to describe the state occurring at all times?

If you know the state at one single time instant $k$ (e.g. by a given initial condition when the system starts operating), then, given an input signal for times $\ge k$, you can use the state-space equations to compute the output signal for $k+1$, $k+2$, etc. to infinity. The state at a time $k$ contains all information about the past history of the system necessary to compute its current and future output given the input signal.

As for the other question why the state equations only relate time $k+1$ to time $k$ and not also to times $k-1$, $k-2$, etc., the answer is again that the state summarizes all past history of the system. Note that in general the state $x$ is a vector. E.g. if you have a discrete-time linear time-invariant system specified by a linear difference equation with constant coefficients, the output is given by a linear combination of past output values, and current and past input values. Such a system can be implemented by a tapped delay line as shown in the figure below for a second-order system. Now if you define the state vector $x$ to be the content of all delay elements at a given time, you kind of exchange the explicit formulation of time dependency spanning several past time indices with a vector-valued equation spanning only one time interval. The more memory a system has, the higher will be the dimension of the state vector. So by using a vector difference equation (i.e. a system of equations) instead of a scalar equation, you can always obtain a first order equation relating time $k+1$ to $k$ and to no other past time indices. 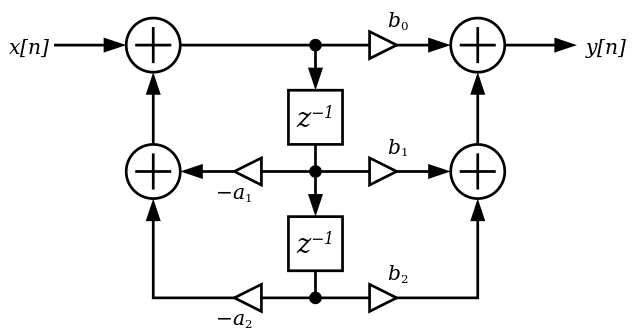 "Biquad filter DF-II" by Akilaa - Own work. Licensed under GFDL via Wikimedia Commons

"How can this model be used to describe the state occurring at all times?" If you mean interpolation there are various techniques for going from discrete to continuous. If you want to peek or evaluate between the discrete time intervals there is a technique called delayed Z transforms. My recommendation would be: Sampled-data control systems by Ragazzini, John Ralph, 1912- It's quite old but in practice provides good guidance. It's available at https://archive.org/details/sampleddatacontr00raga Be aware the technique seems to have fallen out of favor; so some newer engineers might never of heard of it and might disapprove. It can be used to examine responses in-between control settings or, if you know the system, estimate how much the system might be varying between samples. i.e. how ignorant you are at a certain sampling rate.

Not the answer you're looking for? Browse other questions tagged z-transform control-systems state-space or ask your own question.