Claim: Given sampling time T, the hold operator is approximated at low frequency by a time delay of T/2

Can someone verify this statement?

The hold operator is assumed to be a zero order hold

What does it mean for the time hold operator to be approximated by time delay of T/2? How can delaying a signal be equivalent to holding that signal

A zero-order hold can be modeled by a rectangular impulse response of length $T$ (where $T$ is the sampling period) and height $1/T$, starting at $t=0$. The corresponding frequency response is

The following figure illustrates this. The blue line is a signal with a small bandwidth compared to the sampling frequency. The green curve is the result of a zero-order hold operation, where the signal is constant over 1 sampling period $T$. Finally, the red curve is the original signal delayed by $T/2$. If $T$ is very small, the delayed signal is closely approximated by the piecewise constant output of the zero-order hold. 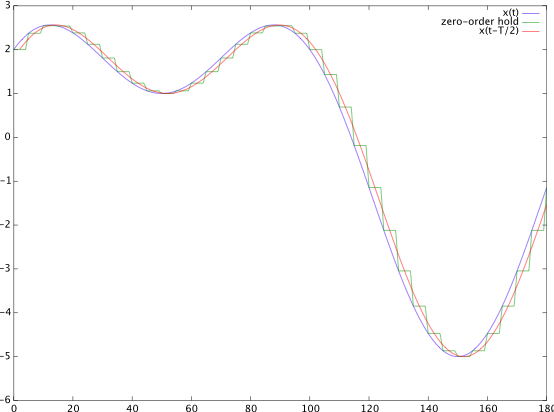 4
Attempting to use the trapezoidal rule to form a difference equation representing a circuit
3
Mathematical model of equivalent-time sampling, the resulting unevenly spaced periodic signal, and its interpretation
2
Sampling distance
2
Estimate sampling frequency given an array of values
0
Does the Nyquist Sampling Theorem hold for a triangular wave?
2
Use of the Dirac delta as a sampling operator
3
Response of an ideal integrator to a cosine wave
0
Ideal low pass filter output at given sampling frequency
2
How to find point of inflexion of a digital signal?