Currently, I have two signals, the main components of both signals are 60Hz, but both also have weaker response at 180Hz + small amount of noise. As shown in the photo below, I want to find the phase difference between the 60Hz component of first signal, and the 180Hz component of the second signal.

As you can see the second waveform of the figure, the phase lagg is of the 180Hz signal is 1.39ms, which coresponds to a 90 degree phase shift. 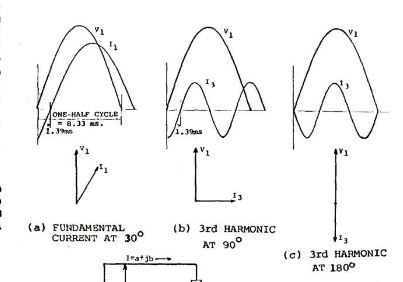 Or if there is better way to do so?

You can find phase between 2 sines, if you write it as a complex signal where 1st sine is a real part and second one is imaginary. But to do so it's necessary to rescale one component to fit another in its amplitude variation. Or another approach is to normalize both sines in amplitude value. There are some explanations:

We have signals $s_1(t)$ and $s_2(t)$, which are assumed to be sine waves. Before the measurement of their phase differences, we have to normalize there signals. The normalization process is:

where $a$ is inverse of integration time (or equivalently filter's length $K$) $a = \frac {1} {K}$ and $k$ sample index in discrete time representation.

If it's real time implementation good practice is to use CORDIC to calculate the phase instead of $atan$ function.

Not the answer you're looking for? Browse other questions tagged matlab fft phase power-spectral-density or ask your own question.

5
Confirmation on how to calculate phase differences at every frequency point between two wideband signals?
2
Estimate phase using STFT in Matlab?
1
Calculate phase shift between two signals
1
How to do smoothing without affecting phase
0
FMCW radar: Linear phase change determination with sinusoidal decomposition