I gotta wrap my head around to design CIC compensation filter

I'm studying by referring these materials:

so I found another reference (2) which I mentioned above.

they explain how to decide the coefficients of taps. but I couldn't figure out some equations.

Here is my first question. How is H(z) converted to H(f). If I substitute z to exp(iwT) it doesn't make sense.

second question I though a0=an=h(1). Is it correct?

finally i used matlab to calculate the coefficients of taps and i got the same coefficients in comparision with a result of the paper, but a simulation gave me a totally different and wrong data

please let me know where I have to modify...

If I violate The copyright issue (because of the content of paper) please tell me and I will edit or delete this.

Here's my matlab code and plot 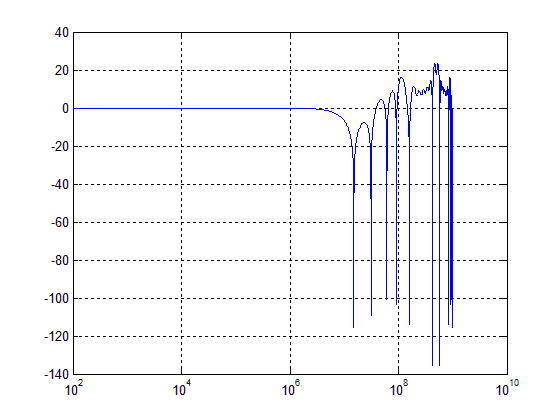 please help me to solve this problem...

I have a simple compensation approach that I've used to implement a reasonable estimate of an inverse $\textrm{sinc}$ for use as a CIC compensator as well as other inverse $\textrm{sinc}$ applications. This approach makes use that the $\textrm{sinc}$ function in the passband can be reasonably approximated by a weighted cosine function. Therefore a raised cosine function in frequency, meaning $b-(\alpha)cos(\omega)$ can be used in cascade with the CIC filter as compensation. This function is adjusted by changing the cosine weight $\alpha$ while keeping $b=1+\alpha$, such that the mean squared error over the passband of interest of the cascaded result is minimized.

Once the minimized passband is established, (you can do this with least squared minimization techniques, but I have done it quickly by evaluating passband error for a least squared miminum while doing a binary search on $\alpha$ values, which quickly converges to an $\alpha$ value that minimizes the error for a given passband), the coefficients of the filter, which is the filter impulse response, are as follows:

It is that easy! The filter is a simple 3 tap FIR with coefficients [$(-\alpha/2)$ $(1+\alpha)$ $(-\alpha/2)$]. Since the filter is symmetric, it can also be implemented with just two multipliers as shown in the figure. Symmetric filters also have the nice benefit that they are linear phase. 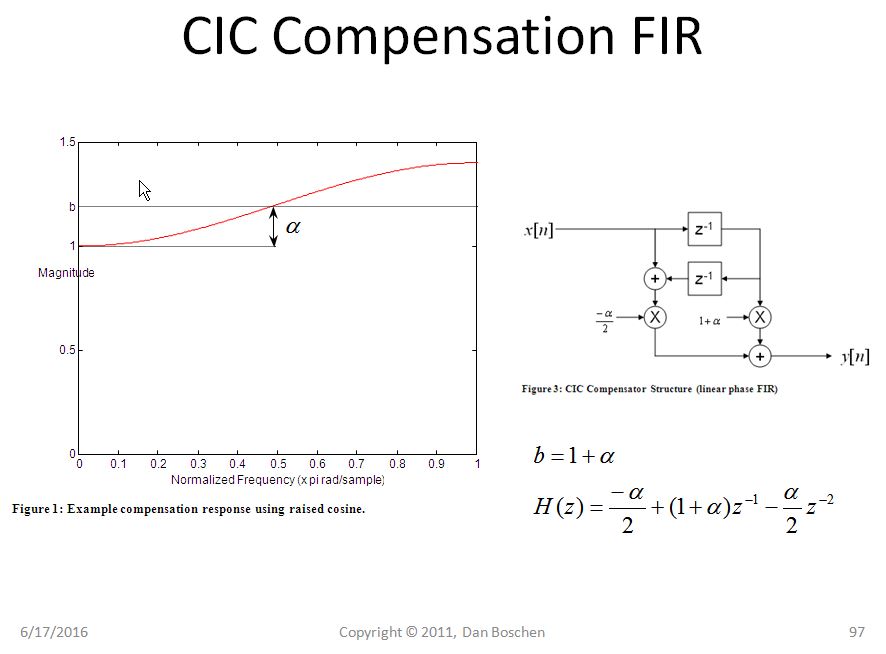 See the figure below for an example of using this CIC compensator in an x8 CIC Intepolator. In use, the signal is passed through the 3 tap compensator at the lower rate, and then fed into the x8 CIC Interpolator with an output at 8x the sample rate. The cascaded response shows the significant improvement that can be achieved with this simple compensator.

What should now be clearer from this figure is that this compensation approach will slightly decrease overall rejection in portions of the stop band. (For this specific example the decrease was on the order of 1.6 dB). However, since the unity gain positions of the compensator will be aligned with the null locations in the CIC response, this reduction in rejection is not in those rejection regions that matter most for CIC rate conversion. 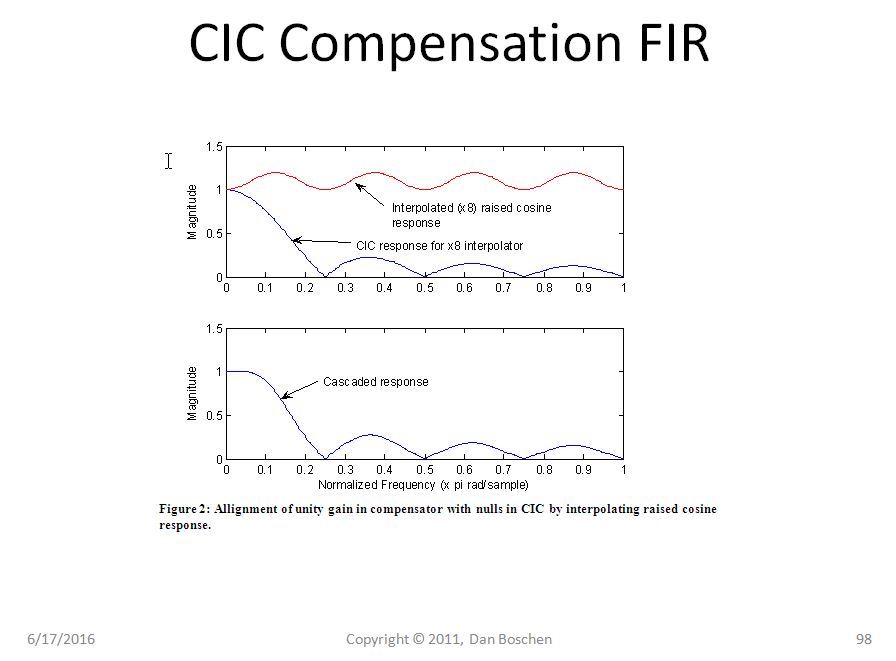 Here is a zoom in of the passband showing the excellent flatness that can be achieved with three taps! 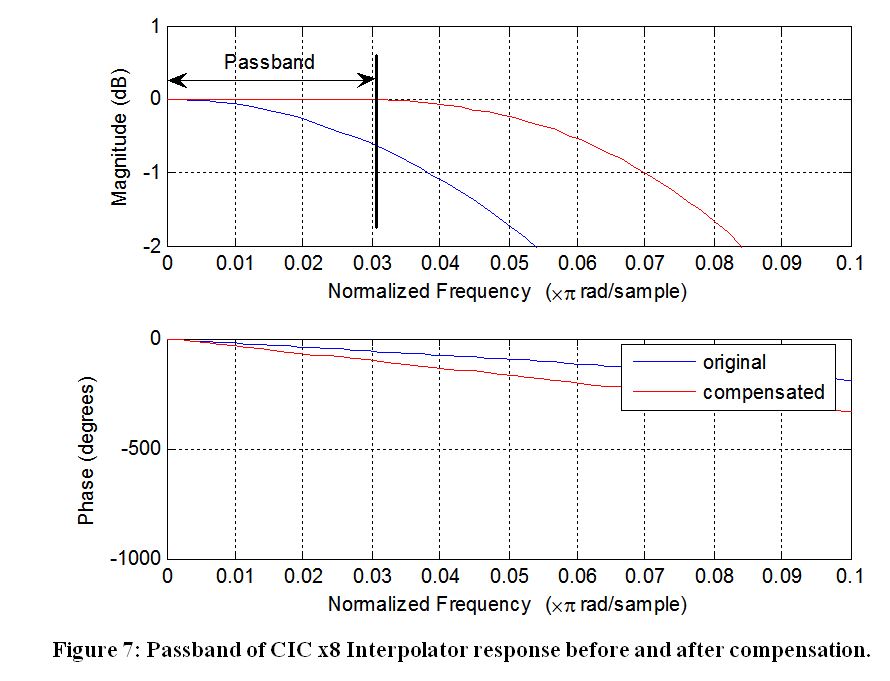 Note on solving for the FIR coefficients from the first figure above.

where $c_n$ are each of the $N$ coefficients, and $\omega$ is the digital frequency domain from $0$ to $2\pi$ corresponding to 0 Hz to the sampling rate.

which is exactly the desired frequency response as given in the first plot (the first term $e^{-j\omega}$ is just the required delay for the filter to be causal but does not affect the magnitude response (and shows how the phase is linear versus $\omega$ ...the same reason all symmetric FIR filters are linear phase- the response for any symmetric FIR can all be described in terms of cosines with a linear phase delay pulled out of the equation!).

The freq response equation of a 41-tap FIR filter will be a constant term plus the sum of (41-3)/2 = 19 cosine terms, where each cosine term has a different frequency. So the general form of the H(f) equation you posted looks correct. (That inappropriate "sigma" notation had me confused at first.) However, the limits of the summation in your $H(f)$ equation should be n = 0 to n = (41-3)/2 = 19. (Was that $H(f)$ equation in the Symposium paper? I hope not.)

I plotted the freq magnitude response of the 41 'h' coefficients that you listed, and my plot doesn't look like your plot. Instead of your Matlab code, in Matlab define your 41 coefficient values as variable 'h' and try this line of code:

Your FIR compensation filter has the appropriate inverse-sin(x)/x shape in the passband but incredibly HUGE stopband ripples! So, ...that 41-tap FIR filter is about as useless as the warning label on a pack of cigarettes. (Were those 41 coefficient values, your h(n), listed in the Symposium paper? I hope not.)

The code in Example 1 at: https://www.altera.com/content/dam/altera-www/global/en_US/pdfs/literature/an/an455.pdf may be useful to you.

I have used this code for myself (filters have been tested in FPGA):

It's Scilab code, but I think it could be easily converted to Matlab one.

The example of usage:

The result will be

The compensation error in the bandpass as I remember will be less than 1 dB.

10
FIR filter compensator when using a CIC decimation filter
11
How to create a distortion compensation filter
0
Interpolating and Decimating CIC filter based on sinc function
1
Given a filter (coefficients) how can I make it minimum phase?
0
How to make signal smooth using filter?
0
How to make low pass filter using frequency sampling method?
2
Implementation of CIC filter using floating point