How can you intutively figure what the impulse response will behave like?

I was trying to understand convolution from this book and came across this figure: 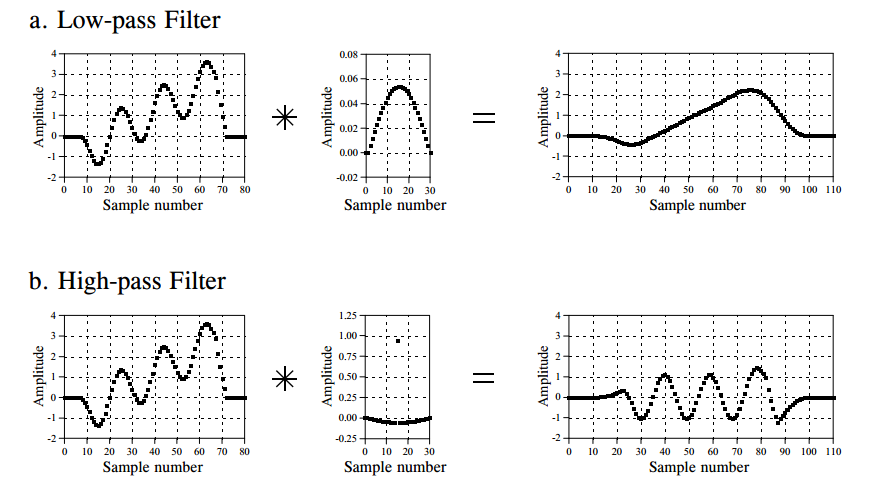 And in fig b, impulse response is actually a high pass filter and the output is just the sine wave.

What I'm trying to do is, just by looking at the wave-forms for the impulse response functions, trying to find an intuitive way of knowing what those impulse responses will do when convoluted with a given input signal. I can't 'see' how the first waveform will result only in the ramp as the output signal when given the mentioned input.

Can you guys figure this intuitively in your head? If so, then how?

In the first case, the impulse response has only positive coefficients. Groups of nearby samples will be averaged to yield the output signal. Thus, short term bumps/variations will be "averaged out", so the signal will be smoother. Furthermore, it looks like all coefficients sum up to 1 (there about 30 of them, in a triangle-like shape, the maximum is about 0.06, I suspect they sum to 1), so the overall amplitude / magnitude of the output waveform will be preserved. Last bit of information: the impulse response has its center of gravity at $n=15$, so the output signal will be delayed by 15 samples.

Summing the output signals from example 1 and example 2 will yield the input signal delayed by 15 samples.

I suggest that you switch books. I just scanned your reference and I'm not enthusiastic. (The code is in BASIC, how vintage).

To answer your question: no I cannot intuitively figure out the results you show. There is too little information. However, with a clearly defined impulse response one can certainly intuit input / output relationships.

Not the answer you're looking for? Browse other questions tagged filters convolution lowpass-filter highpass-filter or ask your own question.

4
Ideal Low-Pass Filter Output?
3
How to Estimate the Input for a Convolution Given the Filter (Impulse Response) and the Output of the Convolution
1
Using DFT Circular convolution property
0
How do I find the phase response of a filter from the filter equation?
3
Why is the frequency response different based on the amplitude of the impulse I feed into the filter?
0
Does Function to Function Multiplication and Convolution, Follow Laws of Convolution
3
How to calculate time of arrival using room impulse response
0
What will the impulse response of a matched filter look like if the input is complex?
0
Is there a generalized method to get the input with the given output and the impulse response?
0
how do I derive the system equation for a simple delay with feedback?