Solving a Convolution Problem of a 1D Signal

I'm finding in trouble trying to resolve this exercise. I have to calculate the convolution of this signal:

where $u(t)$ is Heavyside function

so I do this operation:

Even though I realize that this is a very late response, I will nevertheless try to answer this question because I find it instructive and also because the number of upvotes suggests that this question is of general interest to the community.

One possible interpretation of the convolution $(x*w)(t)$ is that an exponentially damped signal $x(t)$ is filtered by an ideal lowpass filter with impulse response $w(t)$. In the question it was also correctly pointed out that convolution in the time domain corresponds to multiplication in the frequency domain. The Fourier integral of $x(t)$ can be easily computed:

The Fourier transform of $w(t)$ should be familiar because it is an ideal lowpass filter. In the question there was some confusion concerning the definition of the Sinc function. I suggest to simply remember the impulse response of a unity gain lowpass filter with cut-off frequency $\omega_0=2\pi f_0$ without making use of any of the definitions of the Sinc function: $$h_{LP}(t)=\frac{\sin \omega_0 t}{\pi t}\tag{1}$$

In order to find the time function $y(t)=(x*w)(t)$ one can compute the inverse Fourier transformation of $Y(j\omega)=X(j\omega)W(j\omega)$:

Unfortunately, there is no closed form solution of this integral using elementary functions. It can be evaluated numerically using the exponential integral $\text{Ei}(x)$, or, alternatively, the sine and cosine integrals $\text{Si}(x)$ and $\text{Ci}(x)$. So I don't think that the purpose of the exercise was to actually compute the convolution, but its purpose was probably to come up with a qualitative description of what is going on (exponential signal filtered by an ideal lowpass filter).

Nevertheless, I thought it would be instructive to take a look at the signal $y(t)$, so I evaluated it numerically for the parameters $k=0.05$ and $\omega_0=\pi/10$. The following figure shows the result: 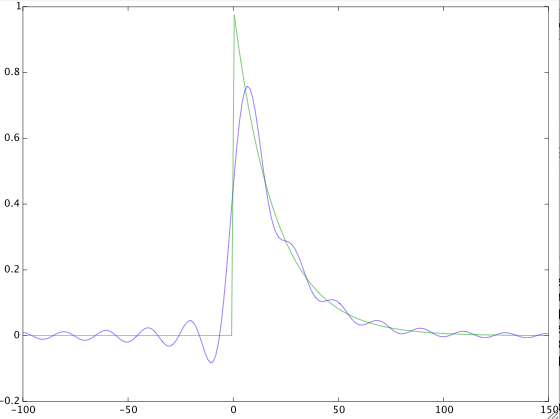 The green curve is the input signal $x(t)$ and the blue curve is the filtered signal $y(t)$. Note the (non-causal) ripples of $y(t)$ for $t<0$ caused by the ideal (non-causal) lowpass filter. If we increase the cut-off frequency of the lowpass filter, the distortion of the input signal should become smaller. This is shown in the next figure where I've increased the cut-off frequency by a factor of 10, i.e. $\omega_0=\pi$ (instead of $\pi/10$): 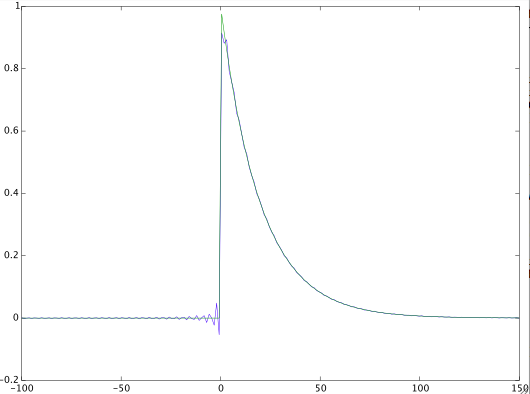 Not the answer you're looking for? Browse other questions tagged fourier-transform convolution homework 1d or ask your own question.