How to distinguish voice from snoring?

Background: I'm working on an iPhone application (alluded to in several other posts) that "listens to" snoring/breathing while one is asleep and determines if there are signs of sleep apnea (as a pre-screen for "sleep lab" testing). The application principally employs "spectral difference" to detect snores/breaths, and it works quite well (ca 0.85--0.90 correlation) when tested against sleep lab recordings (which are actually quite noisy).

Problem: Most "bedroom" noise (fans, etc) I can filter out through several techniques, and often reliably detect breathing at S/N levels where the human ear cannot detect it. The problem is voice noise. It's not unusual to have a television or radio running in the background (or to simply have someone talking in the distance), and the rhythm of voice closely matches breathing/snoring. In fact, I ran a recording of the late author/storyteller Bill Holm through the app and it was essentially indistinguishable from snoring in rhythm, level variability, and several other measures. (Though I can say that apparently he didn't have sleep apnea, at least not while awake.)

So this is a bit of a long shot (and probably a stretch of forum rules), but I'm looking for some ideas on how to distinguish voice. We don't need to filter the snores out somehow (thought that would be nice), but rather we just need a way to reject as "too noisy" sound that is overly polluted with voice.

The first is a rather random piece of rock (I guess) music, and the second is a recording of the late Bill Holm speaking. Both (which I use as my samples of "noise" be differentiated from snoring) have been mixed with noise to sort of obfuscate the signal. (This makes the task of identifying them significantly more difficult.) The third file is ten minutes of a recording of yours truly where the first third is mostly breathing, middle third is mixed breathing/snoring, and the final third is fairly steady snoring. (You get a cough for a bonus.)

All three files have been renamed from ".wav" to "_wav.dat", since many browsers make it maddeningly difficult to download wav files. Just rename them back to ".wav" after downloading.

Update: I thought entropy was "doing the trick" for me, but it turned out to mostly be peculiarities of the test cases I was using, plus an algorithm that wasn't too well designed. In the general case entropy is doing very little for me.

I subsequently tried a technique where I compute the FFT (using several different window function) of the overall signal magnitude (I tried power, spectral flux, and several other measures) sampled about 8 times a second (taking the stats from the main FFT cycle which is every 1024/8000 seconds). With 1024 samples this covers a time range of about two minutes. I was hoping that I would be able to see patterns in this due to the slow rhythm of snoring/breathing vs voice/music (and that it might also be a better way to address the "variability" issue), but while there are hints of a pattern here and there, there's nothing I can really latch onto.

(Further info: For some cases the FFT of signal magnitude produces a very distinct pattern with a strong peak at about 0.2Hz and stairstep harmonics. But the pattern is not nearly so distinct most of the time, and voice and music can generate less distinct versions of a similar pattern. There might be some way to calculate a correlation value for a figure of merit, but it seems that would require curve fitting to about a 4th order polynomial, and doing that once a second in a phone seems impractical.)

I also attempted to do the same FFT of average amplitude for the 5 individual "bands" I've divided the spectrum into. The bands are 4000-2000, 2000-1000, 1000-500, and 500-0. The pattern for the first 4 bands was generally similar to the overall pattern (though there was no real "stand-out" band, and often vanishingly small signal in the higher frequency bands), but the 500-0 band generally was just random.

Bounty: I'm going to give Nathan the bounty, even though he's not offered anything new, given that his was the most productive suggestion to date. I still have a few points I'd be willing to award to someone else, though, if they came through with some good ideas.

According to papers below, snoring is characterized by a peak at about 130Hz, and is wholly concentrated below 12kHz:

Let's see if we can leverage this.

We have a poor recording of a child snoring; a 10-minute, 8-bit mono WAV file. The sampling rate is 8KHz, which means the bandwidth of the audio signal is 4KHz. The level is very low so I will compand it first. 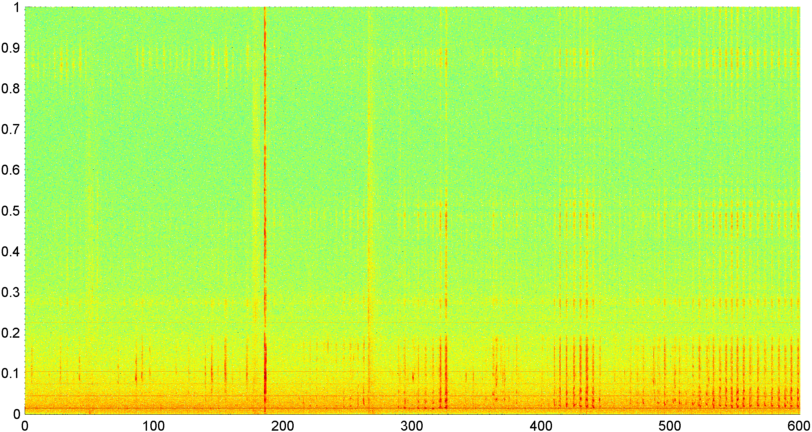 The y axis is normalized to the bandwidth, 4KHz, so that notch you see at 0.1 corresponds to a frequency of 400Hz. There is a spike corresponding to a cough at ~186s; ignore that. We can vaguely see the notches during each snore. Not only that, but they seem concentrated below 0.2 x 4KHz=800Hz. Let's take a closer look. 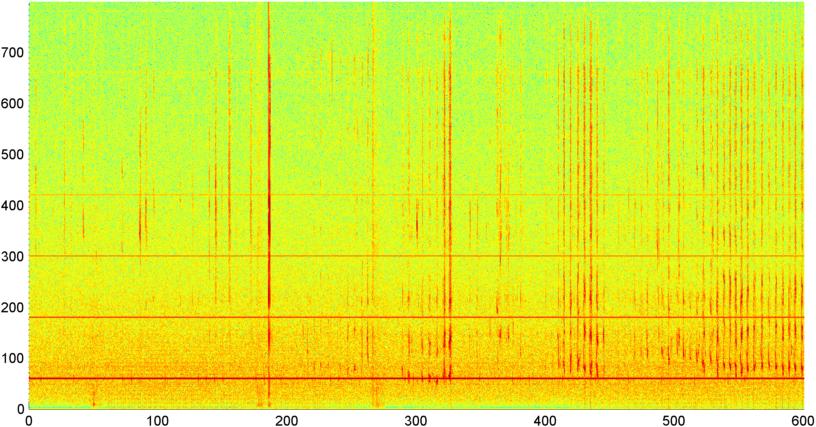 This time the frequency axis was labeled in Hertz. Now the notches are quite clear. We can even see the overtones of the power line noise starting at 60Hz (180Hz, 300Hz, 420Hz). Now comes the essence of the algorithm: let's classify the signal based on the energy in this subband, with the line noise removed.

If we want to get fancy, we can discard oversized spikes:

The low SNR, manifest in the difficulty in discerning the signal in the first plot, means we have leeway of only half a standard deviation (the value of which was 4.1). The stems mark the snores.

Just throwing this in here to cover all the possibilities, you might be able to use entropy, I don't known what the entropy level of snoring vs speech is but if it is different enough that may work. http://www.ee.columbia.edu/~dpwe/papers/ShenHL98-endpoint.pdf

Time domain statistics perhaps? Snoring seem to have relatively long periods of steady state whereas speech energy changes quite a bit over short time periods. This could be combined with spectral analysis as well. Vowels have more low frequency content and consonants more high frequencies. During speech the spectrum may quickly bounce back and forth between those states while storing may stay in one state for longer periods of time.

Spectral complexity over time. I'll hypothesize that human speech probably uses more phonemes, and with much greater statistical complexity in their sequencing than the phoneme sequences of snoring.

This is an probably a much easier problem than continuous speech recognition, as you won't need to actually recognize any particular phoneme or sentence correctly, only the number of phoneme sounding spectral segments, and some statistical complexity measure of their sequences (an entropy or compressibility test might work). Then see if you can determine a reliable threshold for these measures.

10
What is a good FFT window function to reject DC?
8
How to determine the "variability" in a frequency range?
9
peak limiting/audio compression formula needed
11
How can you tell whether there's a signal (when your signal looks a lot like noise)?
4
Extract voice from magnetic tape
9
Best way to evaluate "quality" of autocorrelation?
6
How to recognize patterns in a noisy audio frequency spectrum?
4
How to characterize the regularity of rhythm?

6
How to recognize patterns in a noisy audio frequency spectrum?
8
How to determine the "variability" in a frequency range?
11
How can you tell whether there's a signal (when your signal looks a lot like noise)?
9
Filter message from noisy voice signal
2
About voice filtering
3
Algorithm to detect if a spoken phrase matches a previously spoken phrase
4
Extract voice from magnetic tape
2
Audio, estimate codec's compression ratio only by content