I'm trying to write a C++ function that will return Gaussian random values, given their means and variances.

There is a library function rand(), which returns random numbers between 0 and RAND_MAX. RAND_MAX does not have a fixed value, but it is guarantied that it will be at least $2^{15}-1$. Its PDF is uniform.

I'm using Central Limit Theorem to transform this rand()into a Gaussian variable. What I'm exactly doing is a to call rand() for a user specified times, then add up their return values, then shift its mean to the user specified mean. 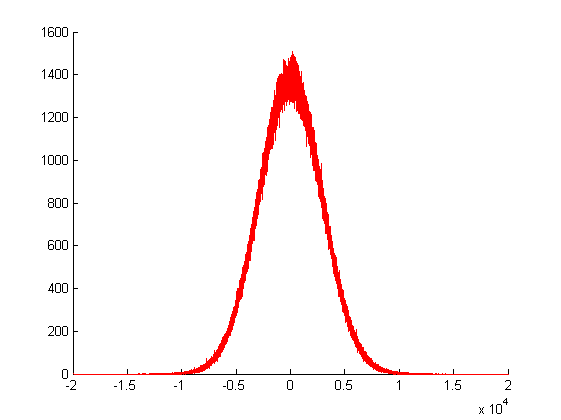 In the plotting above, I called my Gaussian random generator for $10^7$ times, and plotted frequencies of its return values. As you see, its variance is huge, since it is created by sum of a lot of other random values.

It successfully returns a Gaussian variable with a Gaussian PDF and with the specified mean value. However, the problem is its variance. I'm stuck at this point, because I don't know how to change its variance to the user specified value.

This is my code (incomplete for now; the parameter "Variance" is ignored):

As a side note, a template will work reasonable well for floats and doubles but there will be significant numerical problems with any fixed point type.

how can I change variance of this random variable?

There is yet another way!

Think of it, what if you wanted some other distribution as opposed to Gaussian? In that case you couldn't really use Central Limit theorem; how do you then solve it?

There is a way to convert uniform random variable into arbitrary PDF. This method is called Inverse Transform Method

Hence, all you need to do is, apply the inverse CDF function to the variable you have retrieved from the uniform rv's sample.

Also, unlike the earlier methods - this will not require any iteration and won't depend on how many iterations will be taken to make results closers to Gaussian.

Here is one of the references that gives a proof of this.

Not the answer you're looking for? Browse other questions tagged random or ask your own question.