I have done a lot of research and found out methods like adaptive thresholding , watershed etc that can be used of detecting veins in leaves . However thresholding isn't good as it introduces a lot of noise 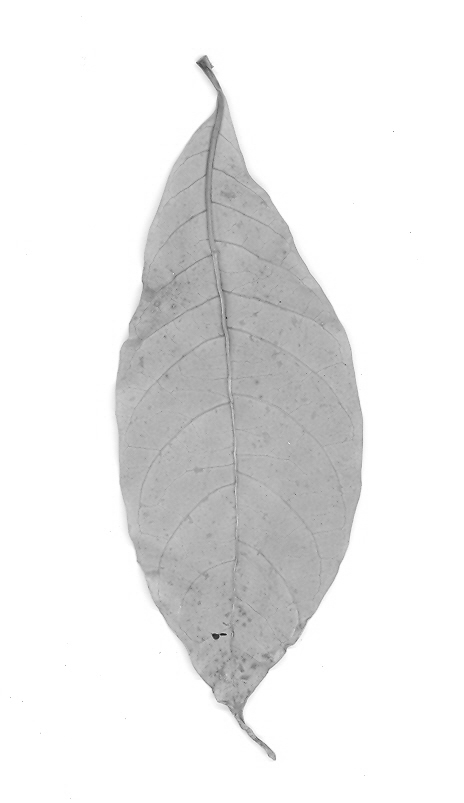 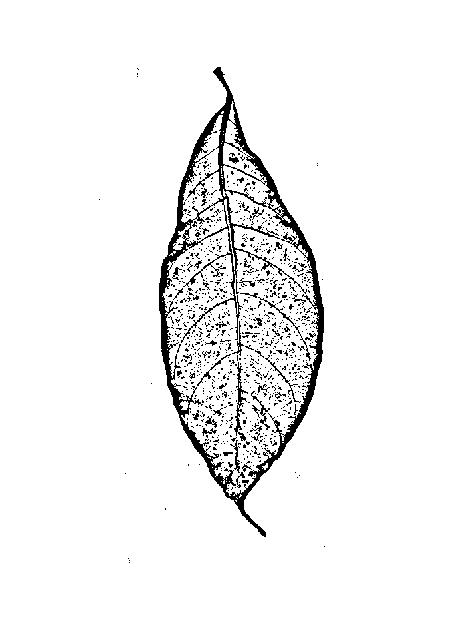 Too much noise and unwanted disturbances 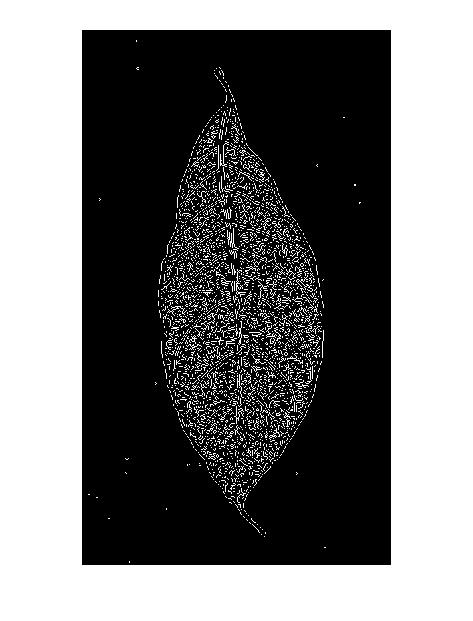 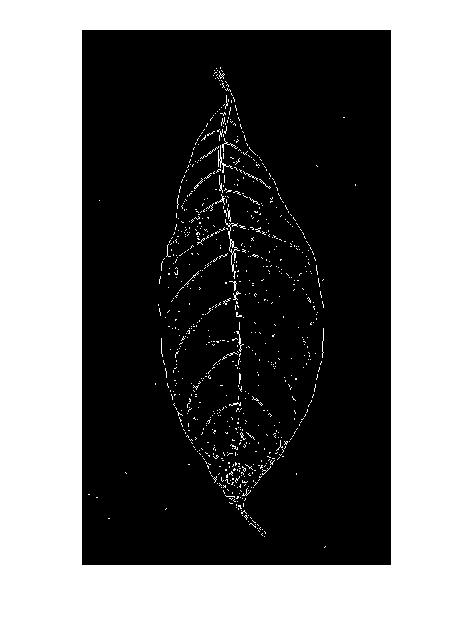 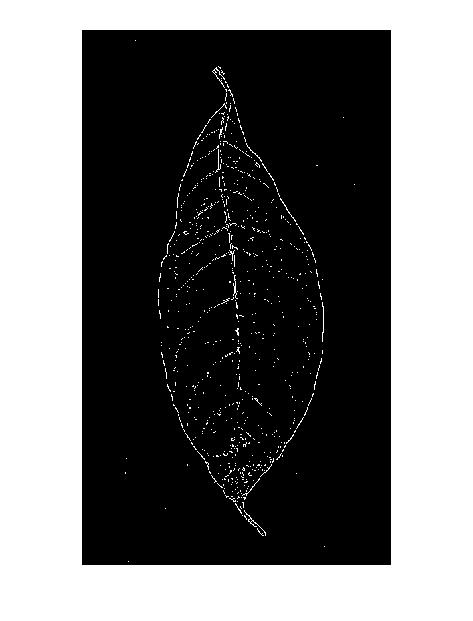 EDIT: Tried one more operation i get the following result its better than what i tried with canny and adaptive What do you feel? 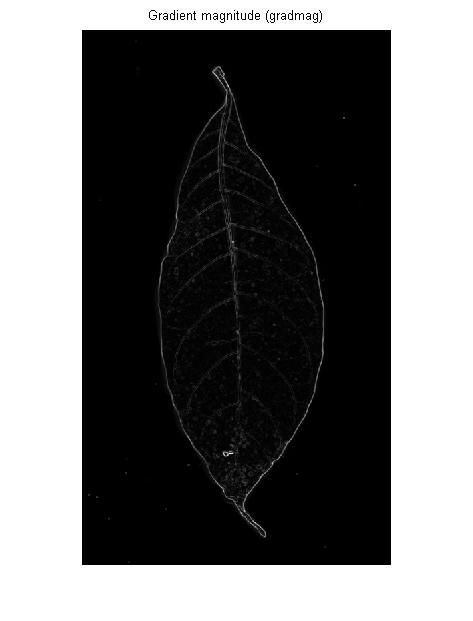 You're not looking for edges (=borders between extended areas of high and low gray value), you're looking for ridges (thin lines darker or brighter than their neighborhood), so edge filters might not be ideal: An edge filter will give you two flanks (one on each side of the line) and a low response in the middle of the line:

ADD: If've been asked to explain the difference between an edge detector and a ridge detector more clearly. I apologize in advance if this answer is getting very long.

An edge detector is (usually) a first derivative operator: If you imagine the input image as a 3D landscape, an edge detector measures the steepness of the slope at each point of that landscape:

If you want to detect the border of an extended bright or dark region, this is just fine. But for the veins in the OP's image it will give you just the same: the outlines left and right of each vein:

That also explains the "double line pattern" in the Canny edge detector results: 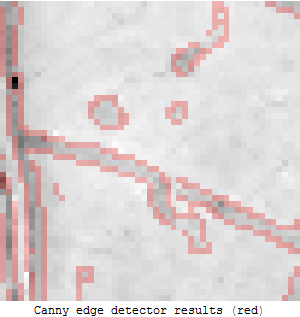 So, how do you detect these thin lines (i.e. ridges), then? The idea is that the pixel values can be (locally) approximated by a 2nd order polynomial, i.e. if the image function is $g$, then for small values of $x$ and $y$:

or, in matrix form:

The 2nd order part of this function can be transformed into the sum of two parabolas $\lambda _1 x^2 + \lambda _2 y^2$ rotated by some angle, by decomposing the Hessian matrix above to a rotation times a diagonal matrix of it's eigenvalues (Matrix decomposition). We don't care about the rotation (we want to detect ridges in any orientation), so we're only interested in $\lambda _1$ and $\lambda _2$

What kind of shapes can this function approximation have? Actually, not that many:

To detect ridges, we want to find areas in the image that look like the last of the plots above, so we're looking for areas where the major eigenvalue of the Hessian is large (compared to the minor eigenvalue). The simplest way to detect that is just to calculate the major eigenvalue at each pixel - and that's what the ridge filter below does.

A ridge filter will probably give better results. I've tried Mathematica's built in RidgeFilter (which calculates the major eigenvalue of the Hessian matrix at each pixel) on your image: 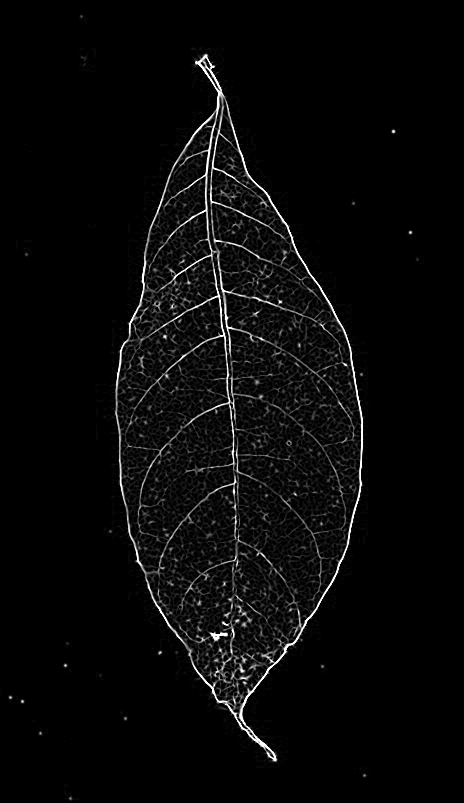 As you can see, there's only a single peak for every thin dark line. Binarizing and skeletonizing yields: 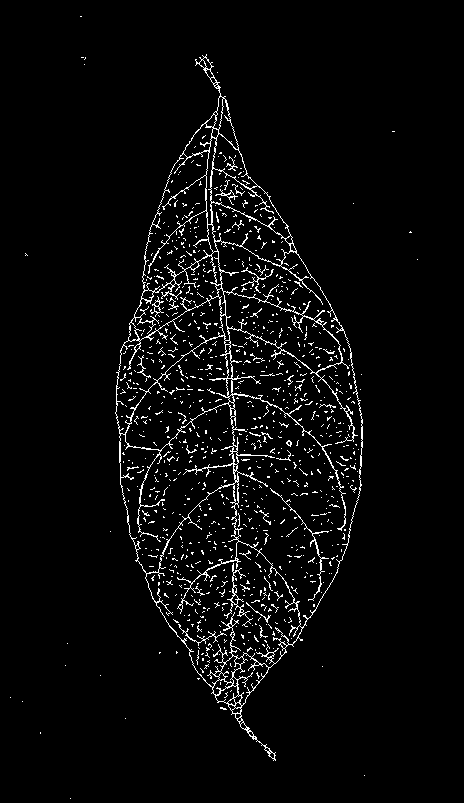 After pruning the skeleton and removing small components (noise) from the image, I get this final skeleton: 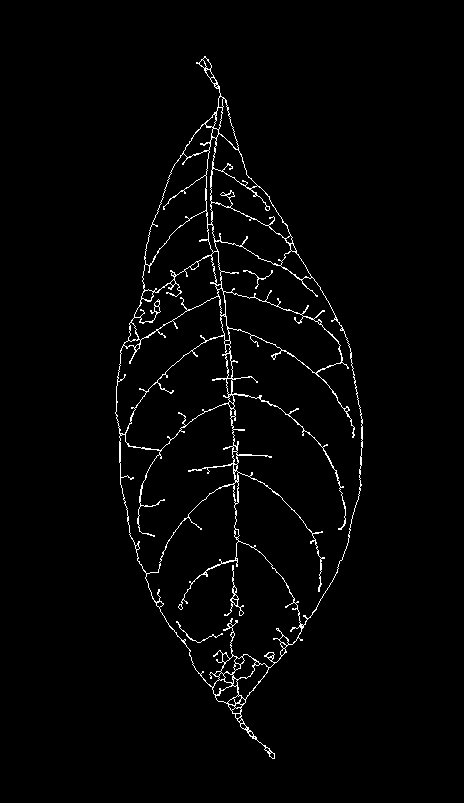 I'm not a Matlab expert, I don't know if it has a built in ridge filter, but I can show you how to implement it "by hand" (again, using Matematica). As I said, the ridge filter is the major eigenvalue of the Hessian matrix. I can calculate that eigenvalue symbolically in Mathematica:

So what you have to do is calculate the second derivatives $H_{\text{xx}}$, $H_{\text{xy}}$, $H_{\text{yy}}$ (using a sobel or derivative of gaussian filter) and insert them into the expression above, and you've got your ridge filter.

Following on from the above excellent answer, here is how to do it in python using scikit funcitons.

When using Canny edge detection (in Halcon), with alpha being 1, and the low threshold 8 and the high threshold 13 (on a scale of 1-255), I get the following result: 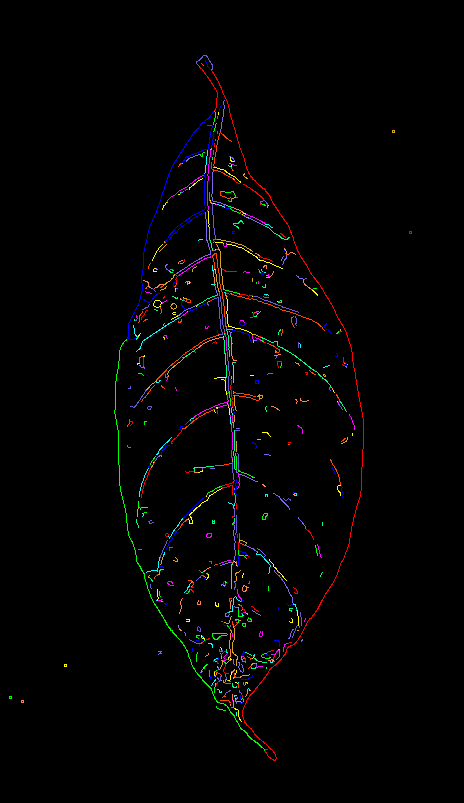 With tweaking of the parameters, the result you got from Canny can be much more improved. Using this image, you can skip the short edges to remove the noise, and connect the long edges for the final result.

I can get a fairly similar result using this online Canny edge detector:

Instead of thresholding, i have applied simple edge detection.

Used GIMP with Difference of Gaussian - Radious Outer:3.0 and Inner:1.0. 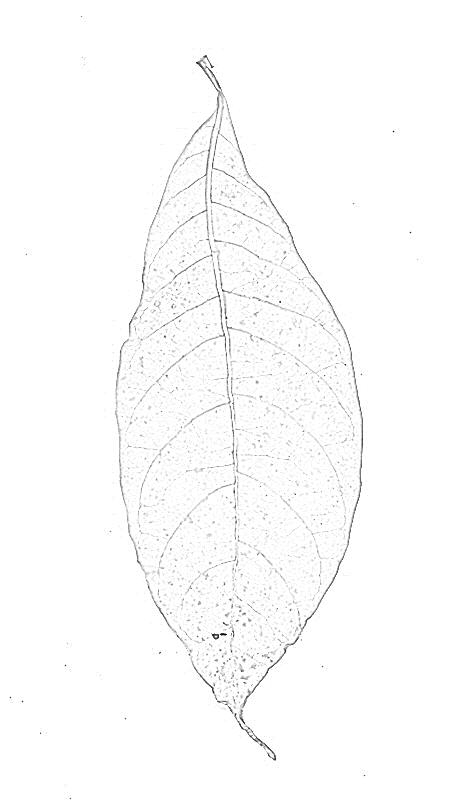 You can further apply a median filter or erosion/dilation so that you can remove some of the grainy noise.

Here is the page that explains gimp's implementation.

You should refer to different techniques like Laplacian of Gaussian or Difference of Gaussin etc. See this: http://homepages.inf.ed.ac.uk/rbf/HIPR2/log.htm#7

And this answer How is the Laplacian used for Unsharp Mask?

This topic has always attracted a lot of interest, and yet no real consensus exists on the topic. Therefore I decided to drop a few words.

My answers to previously asked similar questions on stackexchange (Q1 and Q2) involved a subpixel curvilinear structure extraction algorithm by Steger. This method performed reasonably well in many cases and luckily, including this one. Therefore I post the output image here: 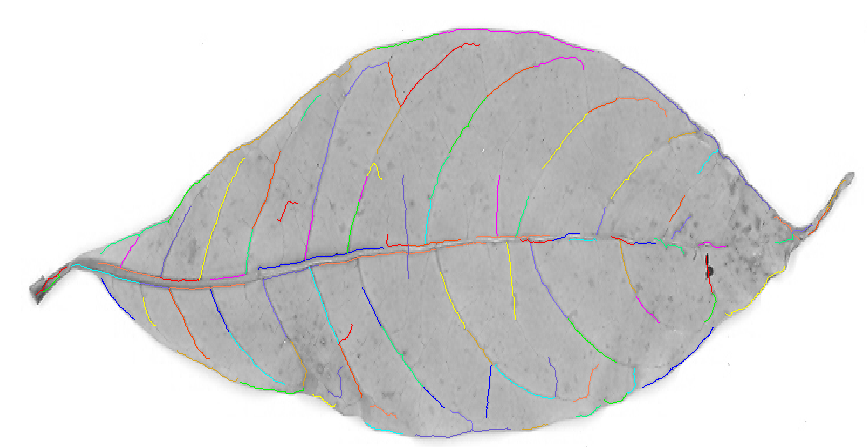 and here with a different parameter setting, and without connected-ness coloring: 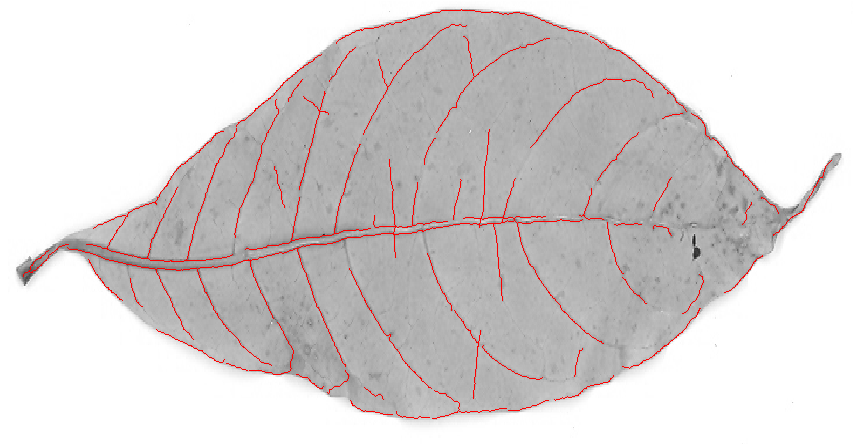 For the details and proper references please see the stackexchange posts I have referred to.

As part of my last year of engineering studies assignment, I had to study segmentation methods for blood vessels in eye fundus images. I found this tree reconstruction method (by Cohen, Laurent D. and Mille, Julien particularly interesting to use along with Fast-Marching Methods.

I hope this helps a bit, though it's not exactly state of the art.

19
What Are the Limitations of a Canny Edge Detector?
10
How Hessian feature detector works?
8
How is the Laplacian used for Unsharp Mask?
10
Could you describe the effects for varying different parameters of a canny edge detector?
4
Vein extraction from this image
2
Detecting Central Axis (petiole/rachis) of a Pinnated Palm
2
Extracting ridges in automatically in image
1
Is there a way to detect ambiguous edges?

9
Segmenting pills from the background
15
Image segmentation issue of different materials
2
Segmenting wood chips in an image
2
Segmenting and labeling chessboards through computer vision
3
Best way of segmenting veins from arm?
0
Why is it called 'multi-level thresholding', if only the best threshold is selected?
0
Good way for segmenting this signal
4
Outlined text extraction from image using OpenCV
0
Detect lines transitioning to blobs in images