Given a template, and a signal, the question arises as to how similar the signal is to the template.

Traditionally a simple correlation approach is used, whereby the template and a signal are cross-correlated, and then the entire result normalized by the product of both their norms. This gives a cross-correlation function that can range from -1 to 1, and the degree of similarity is given as the score of the peak therein.

Attached is a diagram as my example. 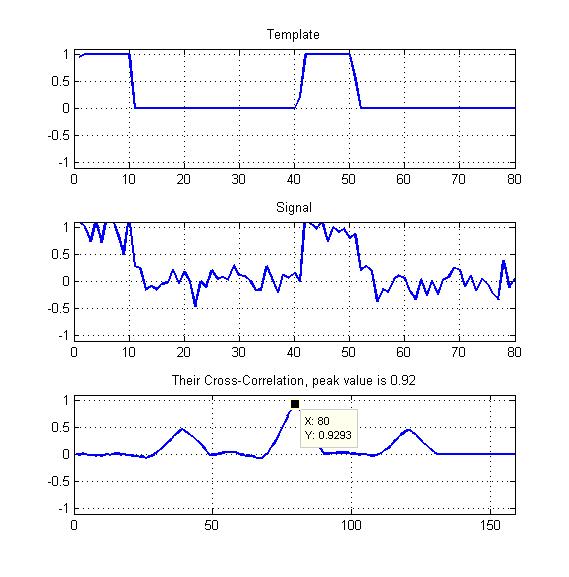 In order to get the best measure of their similarity, I am wondering if I should look at:

I plotted the cross-correlation squared VS a cross-correlation that isnt squared, and it certainly does 'sharpen' the main peak over the others, but I am confused as to what calculation I should be using to determine similarity...

What I am trying to figure out is: 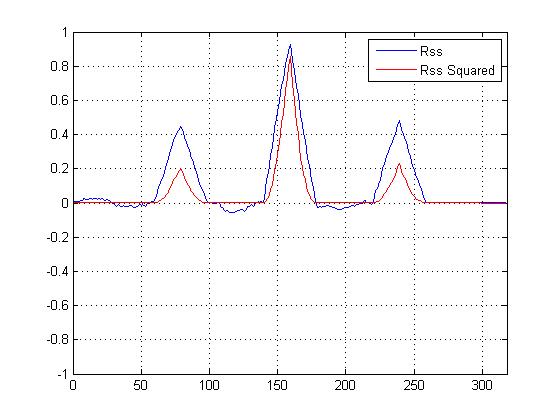 The smaller peaks don't really help in similarity calculations; it is the main peak that matters. But the smaller peaks do provide support for the conjecture that the signal is a noisy version of the template. "

What am I confused about is whether I should simply use the peak of the normalized cross-correlation function as my one and final measure of similarity and 'not care' about what the rest of the cross-corr function does/looks like, OR, should I take the peak value and some_other_metric of the cross-cor into account as well.

P.S. Time delay in this case is not a problem, in that, it is 'not cared' about for this application. P.P.S. I do not have control over the template.

To add some perspective, you could go back to the probabilistic interpretation of correlation. Remember that the correlation is used because it measures the degree of similarity under some linear generative model of the signal knowing the template (additive gaussian noise). The autocorrelation gives a measure of the log-Probability.

To go back to your question, there are a number of free parameters, notably the variance of noise, and this relates to your choice of normalisation.