I have two signals sampled at $100\textrm{ Hz}$ during $3\textrm{ seconds}$. So I have $300$ sample points at each signal series. I want to calculate coherence values between these two time series and would like to know whether this coherence value is statistically significant. I found two resources online.

My question: How can I find the significance of my computed coherence value at a certain frequency (or frequency band) preferably using MATLAB in the light of the above resources?

Great question! I've been grappling to determine how to calculate statistical significance of coherence for several days. This question helped me find some key references I hadn't previously located!

One detail regards whether you're talking about "coherence" or "magnitude-squared coherence". The first resource uses the former and the second uses the latter. I generally prefer the latter:

Where $X(\omega)$ is the fourier transform of $x(t)$, and $\langle \rangle$ denotes an ensemble average of $n$ independent ensembles. Obviously the plain "coherence" is the square root of what is defined above.

The significance level of this magnitude-squared coherence as defined by the two resources is:

Plotting the two functions shows that they are apparently identical: 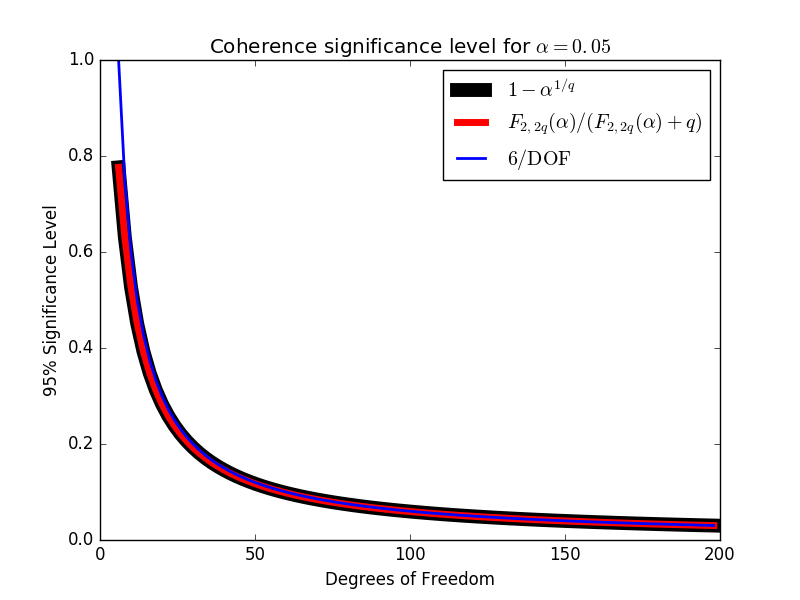 I compared $L_1$ (black) and $L_2$ (red) for several different values of $\alpha$ and they always agree (their difference was always $O(10^{-16})$). I didn't bother doing the algebra to show that $L_1=L_2=L$, but perhaps someone else will find that to be an interesting undertaking?

Lastly, I've included the approximation: $L(\alpha=0.05)\approx6/\mathrm{DOF}$ (blue). I got this from U. Washington Applied Physics Lab professor Jim Thomson, which he apparently got from legendary oceanographer Carl Wunsch. It appears to be a very good approximation when $\alpha=0.05$ and $\mathrm{DOF} > 20$ or so. I'd be interested to see the algebra that shows that:

For both of the resources you pointed to, what they mean by "significance level" is the coherence value that would happen $(1-\alpha)$% of the time if the true coherence were zero. The $n$ in those expressions is the number of degrees of freedom (2$\times$ the number of bands averaged or the number of records used to estimate the coherence).

The theoretical formula really works! You can see this by taking any time series of your choice and computing the coherence against a vector of random numbers. If you do that 1000 times and see compute the mean coherence value that you found, it will be very close to the value given by the formula. In fact, this kind of Monte Carlo significance estimate is another fine way to estimate the significance level.

In the first resource, there is a parameter n (it is the sample size as I could interpret).

Not the answer you're looking for? Browse other questions tagged coherence or ask your own question.