Is it possible to do further beamforming on already beamformed data? 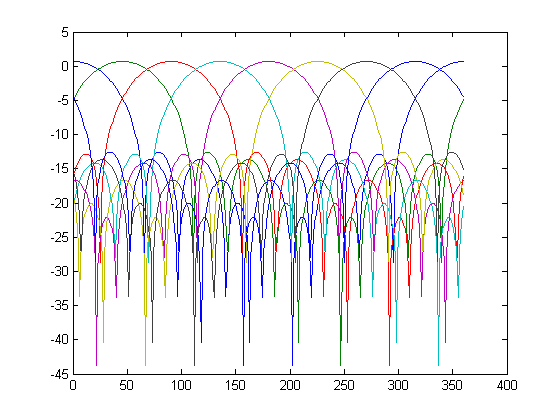 The objective is to reduce my side lobes even further, and to get narrower main beam. What I'm interested in to know if it is possible to take two adjacent beams, and do another step of beamforming, i.e., considering them as if coming from two antenna array with the beam pattern shown in the figure. I don't know how to incorporate the beam pattern into the standard set of equations for beamforming, as I think an omni-directional antenna is assumed. Any directions, suggestions are welcome.

digital beamforming
Share
Improve this question
asked May 21 '14 at 2:11

For now I will focus on the conceptual, pending feedback from you:

What I'm interested in to know if it is possible to take two adjacent beams, and do another step of beamforming,

The answer to this is yes, this is possible to do, and this is done in many beamforming applications. Think about it like this: All beamforming is really doing, is undoing the delays your signals exhibit (by virtue of different sensors at different locations), and summing the result. (Example: Delay-And-Sum beamformer). But in what order you undo the delays, before summing doesn't matter.

The objective is to reduce my side lobes even further, and to get narrower main beam.

EDIT: Taking from the above, if you want to decrease your mainlobe width, you need more spatial samples. However if you want to reduce your sidelobes, then you would use a variety of windowing/shading functons. (Each of those functions will give you a slight increase in mainlobe width, but that is the price to pay). I am not sure what shading you have used for the above plots, but that will be good to know.

Not the answer you're looking for? Browse other questions tagged digital beamforming or ask your own question.