The impulse response of the ideal discrete-time Hilbert transformer is

A naive design approach would be to simply truncate the impulse response given by (2) to obtain an FIR approximation of a Hilbert transformer. The magnitude of the resulting frequency response for an FIR filter with 23 taps is shown by the blue curve in the following figure: 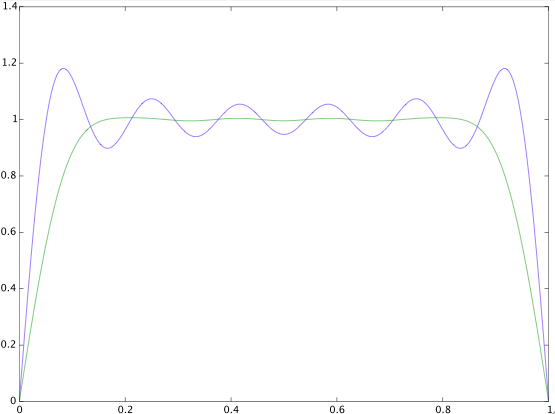 Using more sophisticated methods for designing FIR Hilbert transformers, such as the Parks McClellan algorithm, weighted least squares, or constrained least squares, the Gibbs phenomenon can be avoided. Of course, there will always remain an approximation error, but it can be made sufficiently small by choosing an appropriate filter length. Note that this is not the case when simply truncating the ideal impulse response. In this case, the maximum ripple size near the discontinuity remains the same, regardless of the filter length. Also note that with FIR filters the phase approximation error can be made exactly zero by choosing an anti-symmetric impulse response. The only error is the error in the magnitude of the response, as shown in above figure. This is different from IIR approximations, which can achieve an exact magnitude of 1, but there will always be a phase approximation error. You can find some basics about the design of Hilbert transformers in the textbook Discrete-time Signal Processing by Oppenheim and Schafer.

Not the answer you're looking for? Browse other questions tagged hilbert-transform gibbs-phenomenon or ask your own question.