FFT of a pure sine wave is not a single peak

For fun, I computed the FFT of a pure sine wave. I chose chose the sample length to be an even multiple of the signal period, so that I don't see windowing-effects. Here is the Matlab code that I used:

But instead of a single peak, I get the following result: 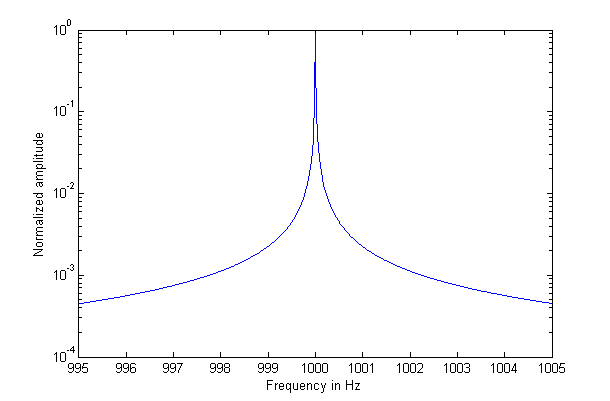 This strikes me as odd for two reasons:

I observed that if I choose a slightly lower frequency (999.9975) then the effect is minimal. What is going on here?

Just as I wanted to click the "ask" button, I realized that I had run into a fencepost problem.

My time vector is too long by 1 point. This means that the first and last point of my voltage vector are the same, which in turn means that my periodic signal has a phase shift as it repeats. This also explains why the phenomenon went (almost) away as I decreased the frequency.

If I instead define my time vector properly as

then I get the result that I expect: A single peak and a tiny bit of noise around it. 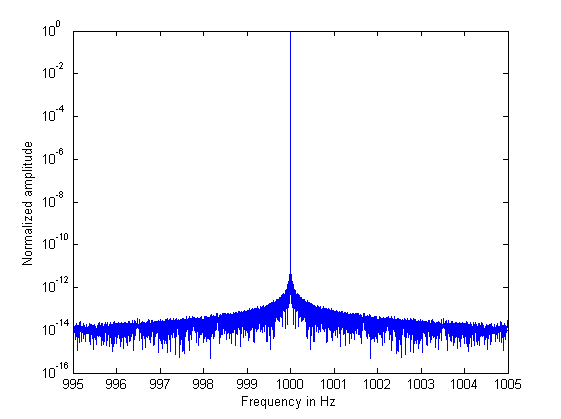 Not the answer you're looking for? Browse other questions tagged matlab fft or ask your own question.

42
Why is the FFT “mirrored”?
3
FFT plot in Matlab, accuracy

3
Comparing Image FFT with Sine wave FFT
15
FFT of sine wave not coming as expected i.e single point
1
PSD looks to clean/continuous
0
Effect of DC component on the whole signal - comparison between normalised and non normalised
4
Extracting Peak Frequencies Using FFT vs. Time Domain Peak Finding
2
Why MATLAB fft cos makes imaginary parts?
2
How do I calculate peak amplitude of the signal components after zero padding and FFT?
0
Phase measurement with FFT for DMM Keithley 7510
3
DFT for signals of different length and sampling rate
1
How to obtain the exact value of wavelength from a 2D FFT amplitude vs wavenumber plot like it is obtainable from 1D FFT amplitude vs wavenumber plot?