I have rich experience signal-processing, but haven't touched image processing since my happy university days... so:

Working on a side project, I need to enhance ridges (continuous lines) in a 2D grey-scale image. Using Matlab, I'm at a point where Canny edge detection does a great job, but since many lines are thick, I get 2-edges for each ridge. Some Questions:

Canny's original paper addressed the issue of ridge edges and roof edges in addition to step edges, but I'm unaware of any implementation of "Canny" edge detection that detects anything other than step edges. Canny's paper is a pretty easy read, but, unfortunately, paywalled. J. Canny, "A computational approach to edge detection", IEEE Trans. Pattern Analysis and Machine Intelligence, 8:679-714, 1986.

Canny's paper is really about how to use calculus of variations to derive a 1-dimensional filter that has optimal response to each type of edge. It turns out that the ridge-edge filter is not scale invariant (you have to know how wide your ridges are). Here is the picture from Canny's paper of the optimal ridge and roof detection operators (page 683, © IEEE, 1986, this is "fair use"): 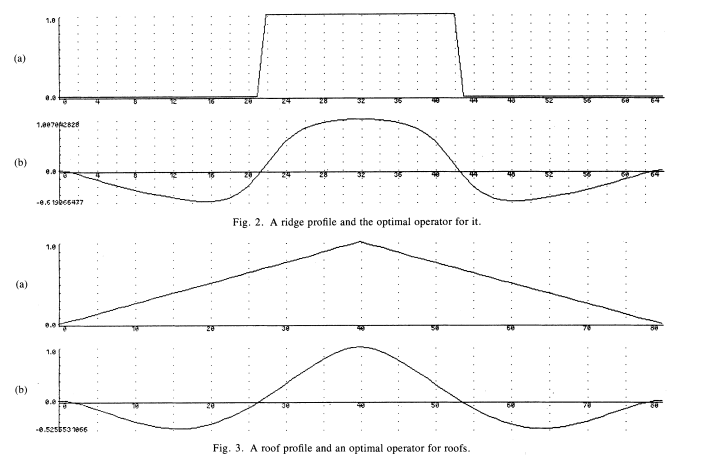 What is typically called "Canny edge detection" is as follows:

Theoretically, you should be able to turn a Canny edge detector into a ridge-edge detector by changing just step 1, but I've never tried it.

Not the answer you're looking for? Browse other questions tagged image-processing canny-edge-detector or ask your own question.

10
Could you describe the effects for varying different parameters of a canny edge detector?
8
Differences between OpenCV Canny and MatLab Canny?
0
Is the Canny algorithm enough for creating a feature descriptor image for input to an SVM?
13
Why Is the Canny Edge Detection Used Instead of Sobel / Prewitt Edge Detection Before Hough Transformation?
1
Getting rid of Canny outliers
0
Detect lines transitioning to blobs in images