I'm trying to measure the angle between two needle positions in an analog meter (gauge). such as:

After the image processing of several images, I get the processed image below(a image show different needle positions: 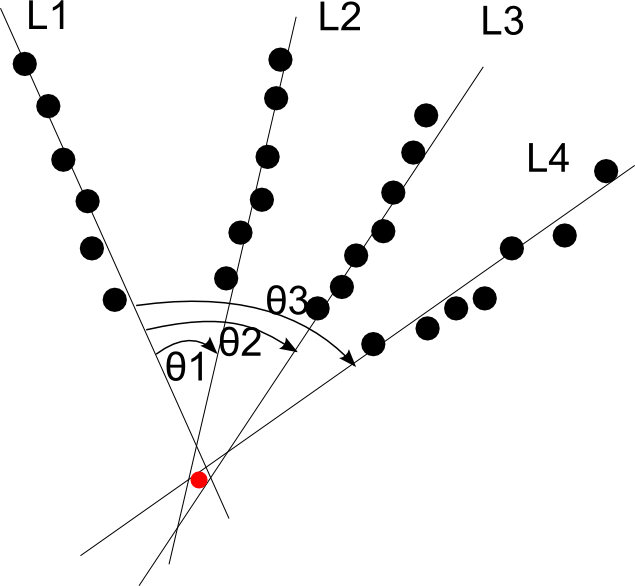 Here, the black dot points were the feature points of needle area, so I use the line fitting algorithm(usually by least square method, or Hough transform to find the line) to get several line positions. I can get the L1, L2, so the angle between those two lines was theta1. But the needle can located in many different places, so I can finally get many positions such as L3, L4...Ln. Those lines should be ideally intersect in one point, which is the rotation center of the needle. I can calculate the equivalent intersection point of all those lines (the red dot), since it is the rotation constraint of the movement.

So, my question is: How can the equivalent point be used to refine the final angle, I mean I want to get a better value of theta1, theta2, theta3....

You could recompute the lines with the constraint that they all go through the red point. If you normally optimize a line

by optimizing both parameters $a$ and $b$, you would now only have 1 degree of freedom for each line. If the red point has coordinates $(x_1,y_1)$ then you get the constrained line equation

with only one parameter $a$. Now you compute $a$ such that the squared distance to the other dots is minimized, and no matter which value of $a$ you obtain, the line will always pass through $(x_1,y_1)$.

Assume, you find the point of intersection as follows:

After finding the point of intersection you could either update rotation or the translation in order to enforce the line to pass through the optimum point.

Not the answer you're looking for? Browse other questions tagged image measurement or ask your own question.