Intuition behind the Continuous Wavelet Transform?

I was thinking sometime back about how to explain the Continuous Wavelet Transform ELI5. So this is what I came across.

The correlation of two exact signals is 1. So if I have an input signal $f(x)$ made up of an array of frequencies, how can I find out what frequencies exist at what points? Well, slide a signal $m(y)$ where $-\infty > y > +\infty$ over $f(x)$, and at those points where the co-relation of these signals is 1, well, those frequencies are present, at those times. This if of course a Continuous Wavelet Transform. Am I correct?

The Fourier Transform exploits the fact that any decently behaved function can be represented as a sum of sinusoids (i.e. a Fourier series) and that the sinusoid basis posses the property of orthogonality:

In this case you are doing this integration over the entire signal so you can't really tell if the frequency content is changing from the beginning of the signal to the end. One way around this is to compute the Short-Time Fourier Transform: i.e. window the signal, calculate the Fourier transform of the windowed signal, store it, then shift the window down a bit and repeat for all shifts:

And here's a graphical example of this showing the new signal for different $\tau$ values and on the right are a few sinusoids to represent what we are using to decompose the signals (i.e. our basis, or kernel). 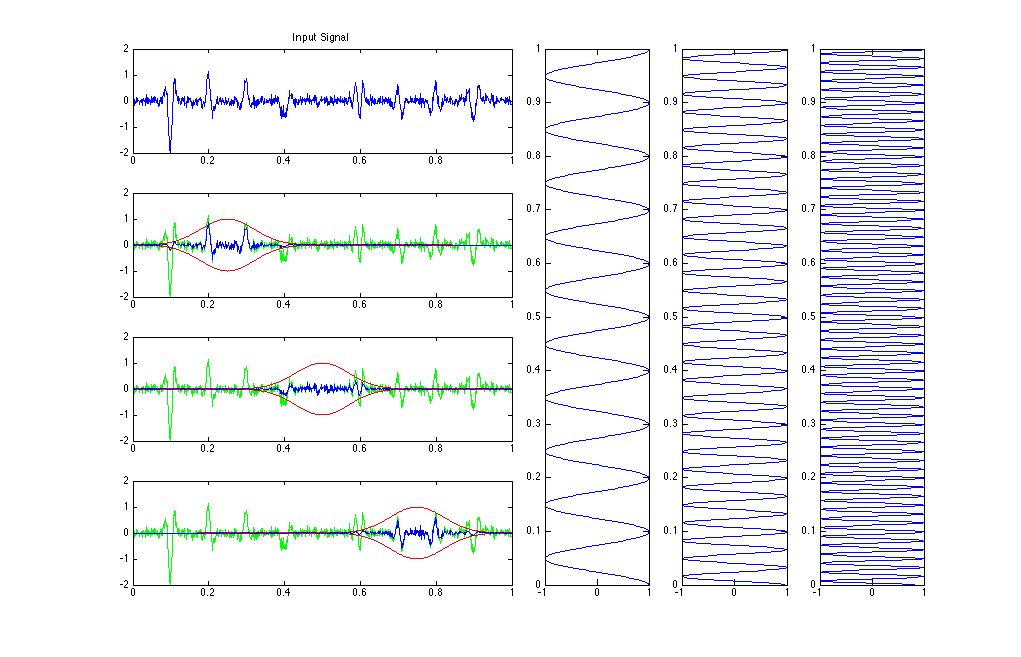 But, we can also change the association as such without changing the outcome: 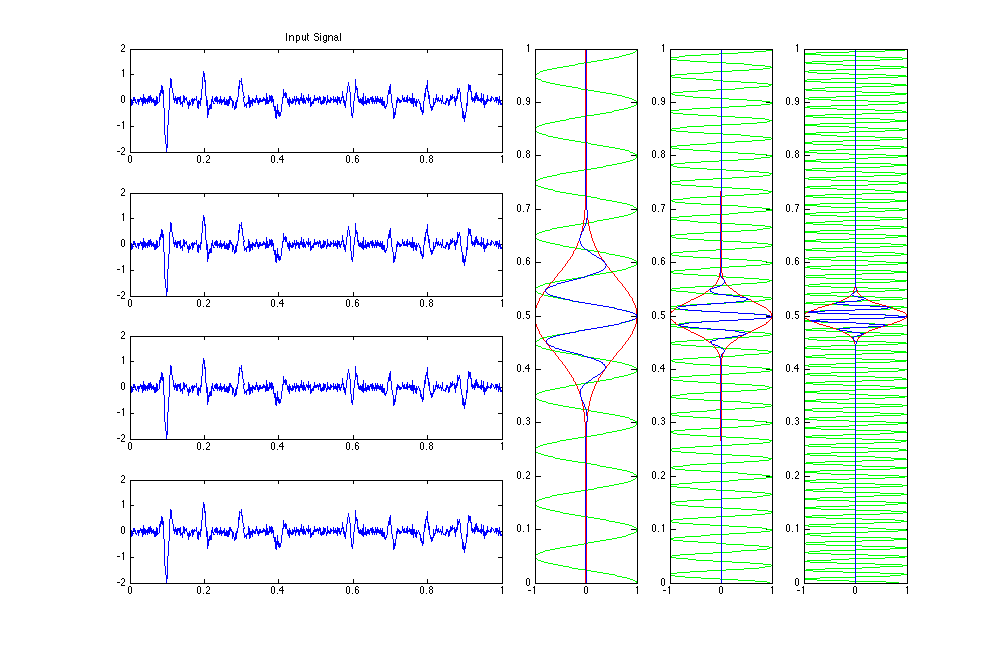 Finally, you can generalize this for any choice of wavelet that you want. In that generalization, you can describe your wavelet basis functions as being "stretched" and "squeezed" versions of some arbitrary "mother" wavelet, $ \psi $. And so the previous equation can now be written as the final form of the CWT:

where $a$ is now what used to be our $\tau$ (i.e. a time shift), and $b$ is called the "scale" which is just a parameter to stretch and squeeze the wavelet (similar to what our parameter $f$ was except now the interpretation is more difficult). And the only reason you have the $\frac{1}{\sqrt b}$ up front is to normalize the wavelets so that they have the same "energy" and you end up comparing apples to apples in your time-frequency representation.

A wavelet has a shape, seldom a frequency. That is why the Gabor transforms and Gabor wavelet got an extra name. The Mexican hat, for instance, can be more precisely described as having a dominant frequency range.

In your explanation, the scale direction of the CWT is still missing. The interpretation of convolution is correct. However, in CWT, detection of details or events of a signal is not unique to one time and scale, there will be a time and scale range associated, most often, something looking like a curve in the time-scale image.

You might be interested in the following link where wavelet transform is intuitively presented. It starts from Fourier transform and points out the problem of loss of localisation in frequency domain. It is followed by Short Time Fourier Transform (STFT). Duality in time frequency is also stated for STFT and then the concept of SCALE is introduced followed by THE WAVELET TRANSFORM