Autocorrelation function of a discrete signal

For a certain experiment of which I have data, I want to calculate the autocorrelation of the measurements. For this I used the expression from Wikipedia, which reads

Now, I've read the descriptions on the page, but I don't fully understand all of the terms in there. I understand why we divide by $(n-k$), because the number of datapoints used constantly changes (you have a finite signal, after all). However, I don't see why we divide by the variance. Moreover, I also don't know why we subtract the mean. Doesn't this lead to problems, if for example for n = 50 and k = 49, we want to multiply $(x_1-\mu)(x_{50}-\mu)$, and $x_1 > \mu$ but $x_{50} < \mu$? I don't really see what a negative correlation would entail.

But -1 is huge, especially when 'previously' the correlations had died out to 0. How does one deal with this?

An illustration of this is 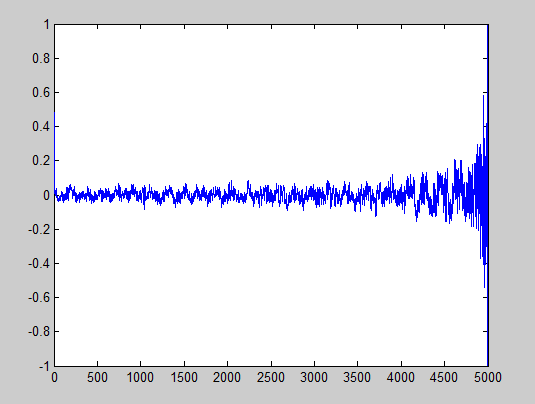 discrete-signals autocorrelation correlation
Share
Improve this question
edited May 25 '17 at 12:49

First: you should really read some basic theory of autocorrelation. For example.

I also don't know why we subtract the mean

First, to subtract the mean is the usual and right thing to do – it's so standard that often it is straightly assumed that the signal has zero mean. Recall that the covariance of two variables is $E[ (x-\mu_x)(y-\mu_y)]$ – of which the variance is a special case. Here we are assuming that the process is stationary, so the mean is constant.

I don't really see what a negative correlation would entail.

However, I don't see why we divide by the variance.

You don't have to. You divide by it if you want a normalized correlation (rather: a correlation coefficient), that will be in the $[-1, 1]$ range.

Actually you have two alternatives here: if you divide by $(n-k)$ you get an unbiased estimator (good), but, you get large variance (the "noise" you see in the graph) for large values of $k$ (bad; however, one is often interested only in the correlation for small values of $k$). Alternatively, one can divide by $n$; this produce a biased estimator but better behaved (lower variance) for large $k$. This is also explained here or in any textbook about correlation estimators.

0
noise of zero mean and variance?
1
Determining the uncertainty of an autocorrelation
5
Autocorrelation of a telegraph process/constant signal
1
Derivative of signal with missing samples
0
Would the ratio of Autocorrelation value and autocorrelation of noise for different data types be different? in Matlab
1
Cramer Rao Lower Bound for Cross Correlation (Time Shift Estimation)
0
What happens when the poles of this z-transform function are outside the ROC for a signal?
0
Amplitude demodulation of sinusidal signal in matlab
0
Computing Autocorrelation via FFT