As part of a class in Signal Processing, I am building a 3rd order Chebychev band reject filter. We implement this by using three cascading Bainter circuits. Although not part of the class, I have a question about the gain of the Bainter circuit.

I am trying to write a script which will automate the component selection using the corner frequencies and maximum overall gain as design rules, but have some issue with calculating the overall gain.

The short answer is: Yes, you can (probably) analyze them individually.

One of the attractions of op-amp based circuits is that op-amps generally have a very low output impedance; for the ideal op-amp, there is zero output impedance. Moreover, the op-amp inputs themselves generally have very high input impedance, ideally infinite. This means that circuit sections whose outputs are op-amp driven can generally be cascaded without having one stage change the behavior of another.

Consider this schematic of a Bainter notch (taken from an Analog Devices publication): 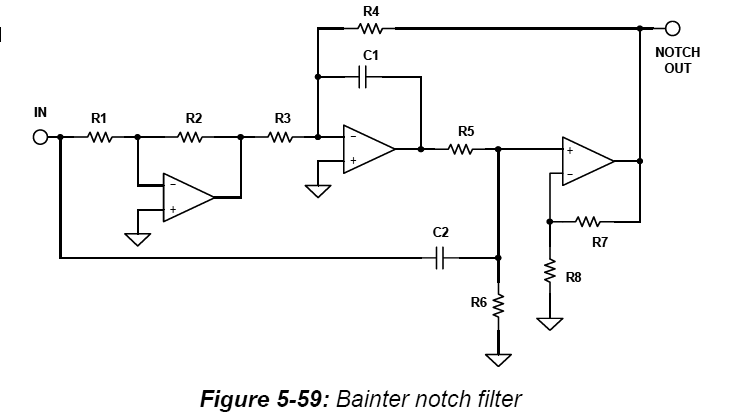 Thus, in the design phase, you can analyze several cascaded notch circuits separately, and simply multiple their transfer functions together. After producing a design in such a way, you might want to simulate the entire circuit in SPICE to check for behaviors due to op-amp nonidealities, etc.

Here's what I did in the end.

When building one stage of the Bainter, I knew the first opamp was a unity inverting buffer. So I could easily check its performance. I knew the next two stages were a high pass and low pass respectively. I did not know exactly what frequency they would break at, but I could roughly check their performance.

Once the Bainter was put together, I was able to calculate the DC gain and step response using Matlab. I measured these two characteristics on the actual Bainter and compared. If they were reasonably close, I moved on to the next Bainter stage and repeat.

Once all three Bainter stages were built (for a 3rd order filter) I wired them in order of lowest to highest DC gain.

In the end, I had a fairly accurate Chebyshev filter.

Thanks for the input.

Not the answer you're looking for? Browse other questions tagged filters filter-design bandpass analog or ask your own question.