here is my scenario: one speaker is sending a chirp, and a microphone is recording it as well as all following echoes. The function of the chirp is already know.

My goal: subtract the original chirp from the recorded sound, and leave only the echoes.

I think this questions is hard for me in these ways:

Well my friend, let me answer your questions here. You've asked why subtraction of recorded sweep from original one will not produce any info about echos. So I took exponential sinusoid in range of $5\mathrm{Hz}$ up to $7995\mathrm{Hz}$, sampling frequency is $16\mathrm{kHz}$. Then I've used some crude filtering:

In result we get the following: 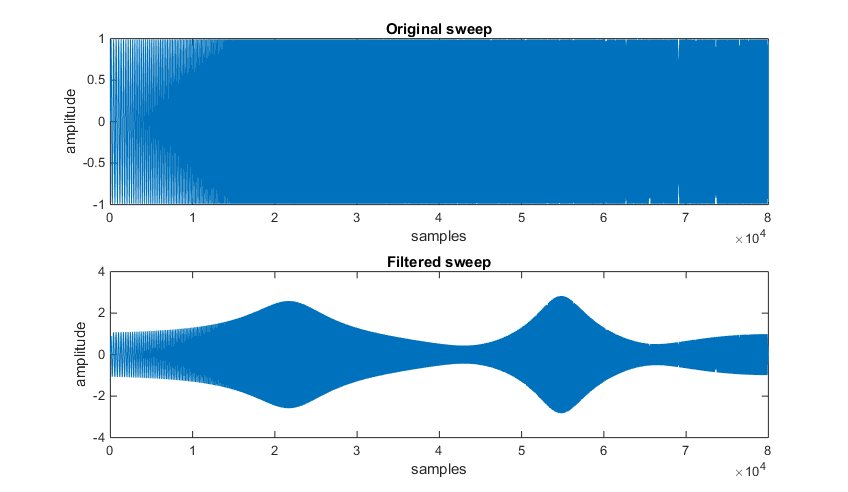 You can see that amplitude is modulated according to filtering applied. Now if we want to get some info about the impulse response of our system, then let's try simple subtraction as suggested by you, that's what we get: 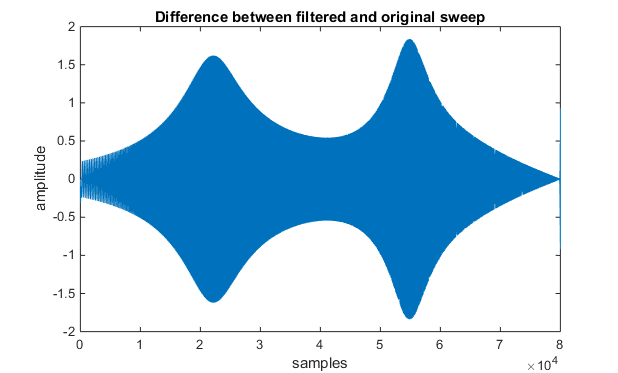 What you can get from this time domain signal is what is the difference between different frequencies in time. Any info about reflections would not be straightforward. This is simple filtering, so there are none, but imagine you have some reverberation in the end, then your recorded signal is longer than played. Thus you have some tail of decaying sinusoids - nightmare to analyse anything But when you deconvolve filtered signal with the inverse filter, that's what you get: 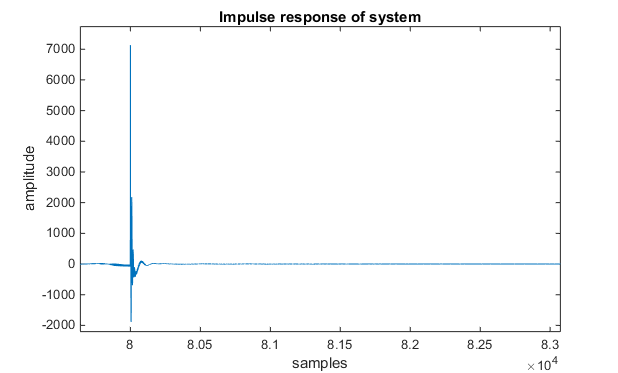 How beautiful is that! ;) You've obtained the impulse response of a filter that was applied at the very beginning. What's more, you can perform Fourier Transform of that impulse response and that will give you frequency response of this filter. I quickly did some frequency analysis, so you can see result below. Upper normalised frequency axis is forced to be logarithmic. You can easily relate that to filtering applied in the beginning. What's more, you can deduce that this plugin is using FIR filter because phase is linear! 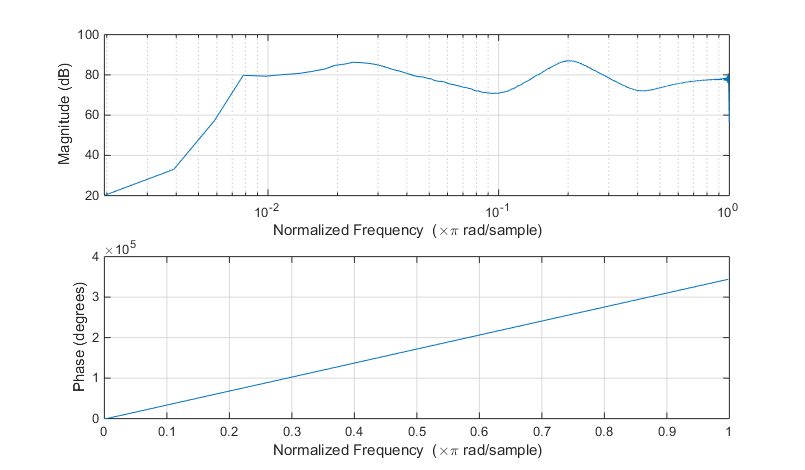 If it was for example measurement of acoustic space, then your impulse response would be: 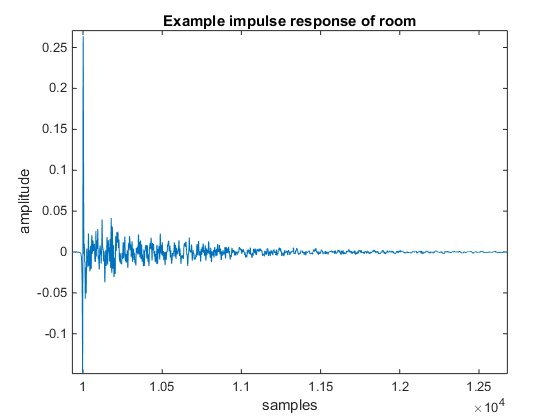 From that you can very easily detect any reflections, delays between arrivals via different paths and even flutter echo or different fancy stuff.

Because you are interested in detection of echo, then I suggest you to read the work of Dietsch (unfortunately in German): Ein objektives Kriterium zur Erfassung von Echostörungen bei Musik- und Sprachdarbietungen

Above all following thesis: Evaluation of objective echo criteria. Guy is investigating echos a lot - you even have MATLAB files in the appendix.

And bit more about derivatives from IR to convince you how powerfull it is: Theoretical and Applied Room Acoustics Including Parameters and IR Derivatives (although that one is targeting more at Architectural Acoustics)

I hope I did convinced you - good luck!

You can't really subtract out the original sweep. You have a transfer function between speaker and microphone that's heavily dependent on frequency so the amplitude of the sweep will be different at every point in time.

The standard method would be to de-convolve the sweep (convolve with the frequency inverse of the excitation signal) and calculate the impulse response this way.

Not the answer you're looking for? Browse other questions tagged audio cross-correlation or ask your own question.