I have read some about Karhunen-Loeve Transform (KLT) and its application to the field of seismic data processing. The method as I understand it based on decomposing the data (actually mostly used in image processing) using SVD on its covariance matrix and projecting the data back after manipulating one or some of the covariance matrix's eigenvalues.
One of the assumptions, when using on seismic data to remove random noise, is that the features to keep, should be aligned in time. If this is not the case, then one have to correct for the observed move-out.

For ex. in the top picture below 400 time samples (y-axis) for more than 50 data traces(x-axis) are shown. Each trace represents data recorded on one geophone. There are multiple "events" in the data represented by horizontal lines across the figure. There is no time delay for the observed event across the traces. The picture in the bottom is the result after applying KLT on the data, by zeroing the smallest eigenvalue of data's covariance matrix. My question is, why the assumption of time alignment of the "event" (horizontal features)? The method fails if the events occurred along a line with a slope, that is the same event was observed with a delay from one trace to the next. 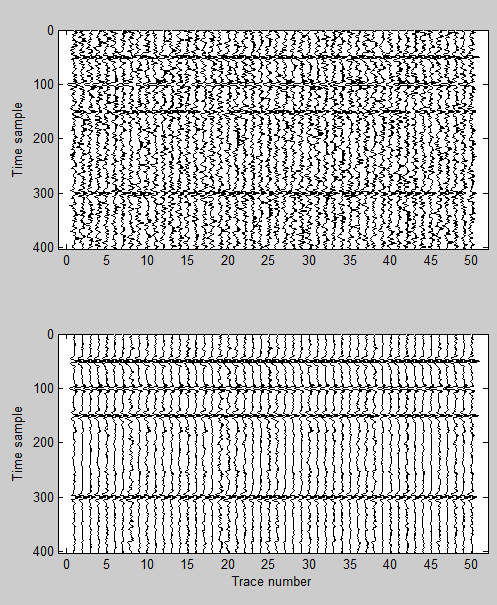 There is something that is not clear of what you have done with the data, and that is who do you form the random vectors to perform de SVD (or EVD) on the covariance matrix.

1 -The KLT can be succesfully used on a one dimensional signal (only one Geophone), taking frames of $M$ samples and estimating a covariance matrix from it, and the performing Eigenvalue decomposition, or with the SVD of the Data matrix (which supposedly is the same), then you sort the eigenvalues (or singular values) in descending order, and remove the smallest ones according to a particular criteria. With this you will remove part of the noise. Based on the process i described, there is no assumption about any correlation between the signaals on the geophones (and in reality i think there will be, but i am not an expert in geology), so if you perform the same processing to every signal, it doesnt matter what delay you have between particular events, the process will still remove noise.

2 - But, if you construct your random vector with one sample from each geophone taken at the same time instant, then the time delay might affect the correlation between each sample from a geophone and then applying KLT might not reduce the noise as it is expected.

The approach number 1 i described is called Temporal PCD (Principal component analysis) and the second one is called Spatial PCA, assuming you put the geophones in different locations.

Personally i think it should not fail if you do spatial PCA, because even though there will be time delay, the samples from different geophones at same time instants will have some degree of correlation, except if you put them hundreds of miles apart, but if they are all in the same region, then they will each sense approximately the same signal but contaminated with noise and probably convoluted with an impulse response of the geographical region, but as long as there is correlation, you can apply KLT.

Not the answer you're looking for? Browse other questions tagged denoising covariance or ask your own question.

9
Question on covariance matrix of 2 spatial signals
17
What Does Make an Error Surface Convex? Is It Determined by the Covarinace Matrix or the Hessian?
0
Question about vanishing moments in wavelet transforms
3
Covariance matrix of an adaptive filter input
5
What Is the Difference Between PCA and Karhunen Loeve (KL Transform)?
0
Denoising before or after Geometric Transform?