I have a doubt. We calculate metrics such as PSNR, SNR, and MSE to prove that the proposed algorithm is better than its counterparts. To do this we need Original image (Noise free), Noisy image (we add this noise) and then Filtered image. Now we compare original and filtered output to estimate these parameters.

My question is, how to estimate these parameters when we have only the noisy image? That is in case of an ultrasound image, speckle noise occurs in the original image itself. We don't have a noisy free images in case of ultrasound. If we do as usual (as stated above), we will get poor results (PSNR,SNR & MSE) even though the subjective quality of the image is improved considerably.

Well, one way to do is to add extra noise to this noisy (original) image and apply our filter and show that the added noise has been removed efficiently. I want you to suggest any other ways to prove that my proposed algorithm is performing better than its counterparts. 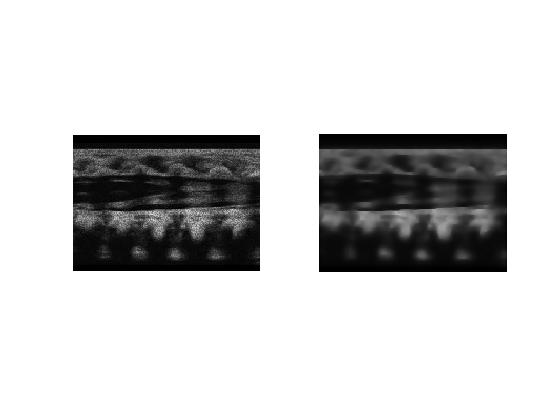 How would you expect the effect of a denoising model? Do you want it to exceed your ability to observe the noise pattern and remove them, or to replace you and remove the known pattern which you define as noise?

I think most denoising algorithms target the 2nd option. That's the reason why it makes more sense to quantify and compare different algorithms through simulations. The paper assumes the main source of noise comes from speckle, which can be further assumed as Gaussian noise. So they added normal distribution values onto the 'clean' image, and PSNR, SNR, and MSE all get involved with the variation of the image. Such variation is just due to the adding values. They are actually trying to find out which algorithm can reduce such variation to the closest level of 'clean' image. So the comparisons have to be implemented with the known 'clean' image.

Strictly speaking, the 'clean' image in the paper is not clean at all. It is experimental data from ultrasonic B mode scan, and includes the unknown noise. I remember you asked a question in SO very long ago, claiming that you failed to reproduce some of the comparison results from the paper. That's very possible, since as I mentioned above, you can only evaluate your algorithms via simulations, and the 'clean' image should have been generated as a computational phantom. Otherwise you don't even know which part of the image from experiment, other than your added value, is treated as noise in your algorithm.

As far as I know, SNR can be used as the quantification of experimental data, but it is not calculated that way in your paper. The aim of your algorithm is to enhance the region of interest (organ, tissues in the ultrasound image), making it clearer to the diagnosis. As a result, you'd better choose such regions by yourself, and select other background regions as the 'noise' part in SNR calculation. If you have more than one regions not viewed as background, contrast to noise ratio (CNR) is also suited in your contrast quantification (this is more used in MRI image analysis). Besides, edge spread function (ESF) along with modulation transfer function are often used in optical imaging.

You may also find some books on image analysis useful in image quality evaluation.

Not the answer you're looking for? Browse other questions tagged image-processing denoising or ask your own question.