How can one improve the robustness of adaptive beamformers to signal mismatches?

Compared to standard (conventional) beamformers, adaptive beamformers such as minimum variance distortionless response (MVDR) have much better resolution and interference nulling capabilities. Briefly, the MVDR beamformer is as follows:

If $\mathbf{a}_\theta$ is the look-vector in the direction $\theta$ and if $\widehat{\mathbf{R}}$ is the covariance matrix of observations, then the adaptive weight vectors are calculated as

and the output power of the MVDR beamformer is

However, these adaptive beamformers are also prone to severe performance hits when there is a signal mismatch i.e., when the steering vector model for the signal of interest doesn't match what's in the data or when the actual array positions are perturbed from the array positions used in the steering/look vectors (which is what happens in practice). The performance degradation can be so large that it becomes inferior to the conventional beamformer.

How can one increase the robustness of adaptive beamformers (in this case, the MVDR, but applicable more generally) to signal mismatches?

Here's the result from a simulation with two plane wave signals, one at $+30^\circ$ and the other at $-22.5^\circ$ and 10 dB down from the first, impinging on a 10 element uniform line array (spaced at $\lambda/2$, where $\lambda$ is the wavelength) in a noisy environment (the exact value of the noise power is immaterial here and you can assume it to be much lower than the signal powers). The covariance matrix is formed from 50 observations (snapshots). The top two panels show the outputs of the MVDR and the conventional beamformers and you can clearly see that the MVDR has high resolution compared to the conventional. Both do a good job of estimating the signal power.

However, when the element positions are slightly perturbed (perturbation is unknown to the beamformer), causing a mismatch in the actual signal steering vector and the model, the signal power estimates of the MVDR beamformer goes kaput. It can hardly measure them correctly, although it still does a good job of localising the signals. Comparatively, the conventional beamformer gets the relative powers right, although its harder to localise the signal due to increased sidelobes. (Note: The plots have all been normalized by the maximum power so although you can't see it, the peak at $30^\circ$ in the top left plot is at 0 dB. So this doesn't truly show how the actual power estimate degrades due to mismatches, as I just wanted to paint a qualitative picture.) 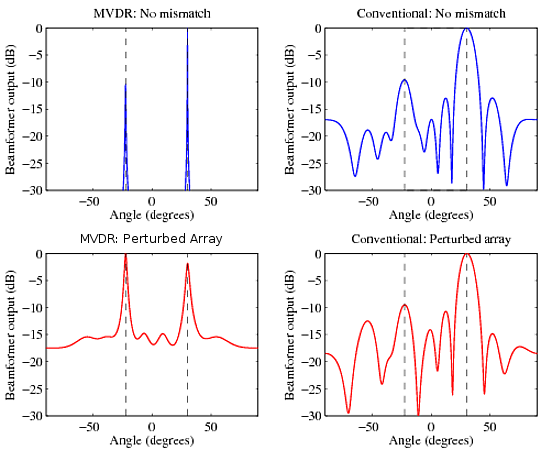 Is it possible for me to improve the estimates of the signal powers using the MVDR beamformer in the perturbed case?

One approach that I'm aware of is to "load" the diagonal of $\widehat{\mathbf{R}}$ by some value $\sigma_d^2$ in order to stabilize the covariance matrix and make the adaptive vectors more robust to signal mismatches. This is often done in matched field processing and is referred to as diagonal loading or white noise constraint beamforming.

In other words, the robustified adaptive weight vectors are calculated as

and the output beam power is now computed as

Here's the result comparing the no mismatch, mismatch due to perturbed array and diagonally loaded cases for the MVDR beamformer for the situation in the question. There is an improvement in the signal power estimation, at the expense of increased background noise power. 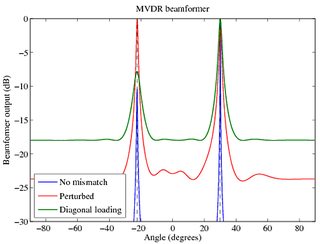 Not the answer you're looking for? Browse other questions tagged beamforming distortion or ask your own question.

5
Why does diagonal loading of a covariance matrix make an adaptive beamformer more robust in the case of a perturbed array?