Some background: I am putting a sig-gen signal through an ADC, into an FPGA where I can modify it, out a DAC and up to a SpecAn. All that works fine.

I am experimenting with fractional delay filters, coefficients, and IF values (which are just my sine wave coming in for testing). I sample at 200MHz, and I have played with IFs of 25MHz, 50MHz, 66.667MHz and other in between. What I do on the FPGA is take the inputted signal, and sum it with a delayed copy of a signal (think multipath). The delay is being varied by using a fractional delay filter to create the copy (either 3 coefficients or 7 right now; all the below is for 7 coefficients).

My question is, what is the relationship between the number of coefficients I use, and the frequency of the IF? I think I am missing something fundamental (and probably easy), but I can't see what.

Here is a plot of the summations of the 25MHz signal with 7 coefficients on the fractional delay. The y-axis is the signal level (dBm) and the x-axis is the amount of delay. I stepped from 0 clock delay to 12 clocks (60ns) in 0.4 clock increments (2ns). You can see the in-phase additions at clocks delays 0 and 8, and the out of phase cancellations at 4 and 12 clock delays. 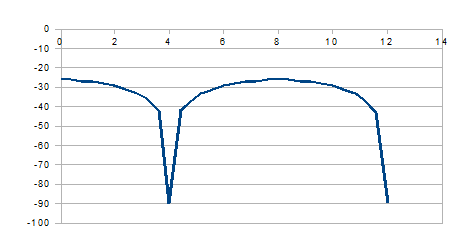 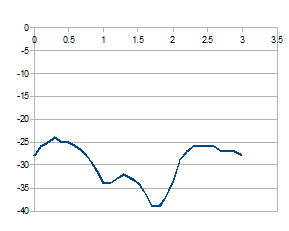 What you can see in the second plot is that there seems to be a lag in the prediction. I actually have peaks just after where I would expect to see them (delays 0 and presumably 3), and my out-of-phase signal seems to appear after where I would expect it as well (1.5 clocks). There also appears to be more unevenness and the signal isn't as steady as the first plot (which was nearly as perfect and smooth as I could expect).

I understand that the faster IF is going to be harder to predict, but I feel like there is a relationship that I am missing between the IF, fractional delay coefficients, and maybe even sample rate.

Can anyone enlighten me?

Browse other questions tagged filter-design continuous-signals filtering or ask your own question.

5
What does the uncertainty principle say about recursive filters?
0
Signal reconstruction in FMCW radar
0
Convolution with an impulse response does not give the same result as the frequency response
0
How to eliminate negative frequencies from IQ signal
1
Eight Sub Band Filter Design
0
Relationship between interpolation accuracy, impulse response and frequency response
2
How determine the delay in my signal practically