So, I was reading the paper on SURF (Bay, Ess, Tuytelaars, Van Gool: Speeded-Up Robust Features (SURF)) and I can not comprehend this paragraph below:

Due to the use of box filters and integral images, we do not have to iteratively apply the same filter to the output of a previously filtered layer, but instead can apply box filters of any size at exactly the same speed directly on the original image and even in parallel (although the latter is not exploited here). Therefore, the scale space is analysed by up-scaling the filter size rather than iteratively reducing the image size, figure 4.

PS: The paper has an explanation of integral image, however the whole content of the paper is based on the particular paragraph above. If anybody has read this paper, can you briefly mention what is going on here. The whole mathematical explanation is quite intricate to have a good grasp first up, so I need some assistance. Thanks.

Each octave is subdivided into a constant number of scale levels. Due to the discrete nature of integral images, the minimum scale difference between 2 subsequent scales depends on the length lo of the positive or negative lobes of the partial second order derivative in the direction of derivation (x or y), which is set to a third of the filter size length. For the 9x9 filter, this length lo is 3. For two successive levels, we must increase this size by a minimum of 2 pixels (one pixel on every side) in order to keep the size uneven and thus ensure the presence of the central pixel. This results in a total increase of the mask size by 6 pixels (see figure 5). 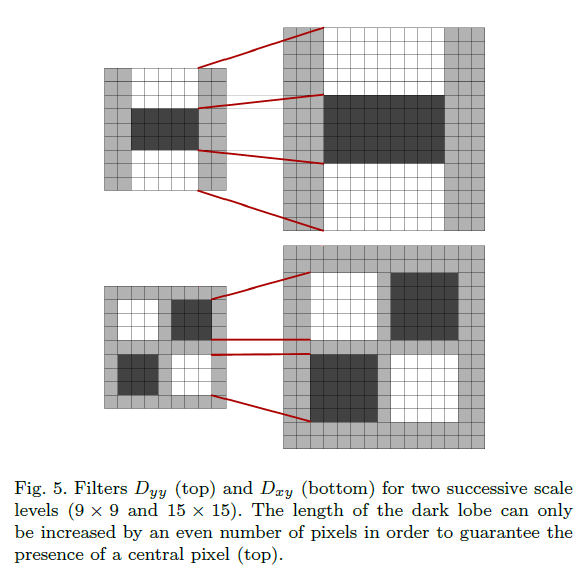 I could not make sense of the lines in the given context.

For two successive levels, we must increase this size by a minimum of 2 pixels (one pixel on every side) in order to keep the size uneven and thus ensure the presence of the central pixel.

I know they are trying to do something with the length of the image, if its even they are trying to make it odd, so that there is a central pixel which will enable them to calculate the maximum or the minimum of the pixel gradient. I am bit iffy about its contextual meaning.

In order to calculate descriptor Haar wavelet is used. 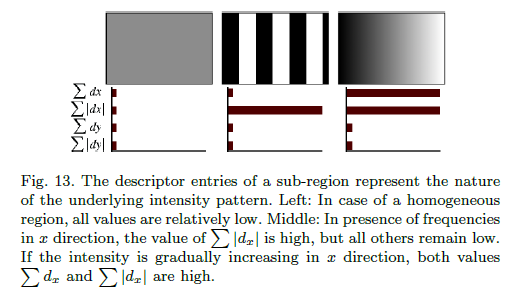 What is the necessity of having an approximate filter?

4. I have no issue with the way that they found out the size of the filter. They "did" something empirically. However, I have some nagging issue with this piece of line

The output of the 9x9 filter, introduced in the previous section, is considered as the initial scale layer, to which we will refer as scale s = 1.2 (approximating Gaussian derivatives with σ= 1.2).

How did they found out about the value of σ . Moreover how does the calculation of scaling done shown in the image below.The reason I am stating about this image is that the value of s=1.2 keeps on recurring, without clearly stating about its origin. 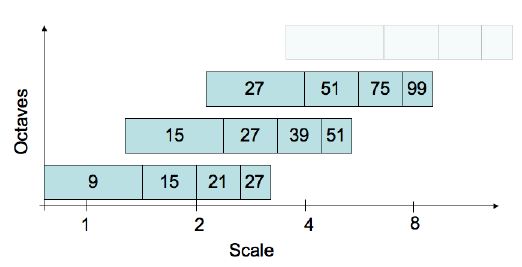 5. The Hessian Matrix represented in terms of L which is the convolution of second order gradient of Gausssian filter and the image.

However the "approximated" determinant is said to contain only terms involving second order Gaussian filter.

The value of w is:

My question why the determinant is calculated like that above, and what is the relationship between approximate Hessian and Hessian matrix.

In order to correctly understand what is going on, you also need to be familiar with SIFT: SURF is basically an approximation of SIFT. Now, the real question becomes: what's SIFT?.

SIFT is both a keypoint detector and a keypoint descriptor. In the detector part, SIFT is essentially a multi-scale variant of classical corner detectors such as the Harris corner, and that has the ability to auto-tune the scale. Then, given a location and a patch size (derived from the scale), it can compute the descriptor part.

SIFT is very good at matching locally affine pieces of images, but it has one drawback: it is expensive (i.e., long) to compute. A large amount of time is spent in computing the Gaussian scale-space (in the detector part), then in computing histograms of the gradient direction (for the descriptor part).

Both SIFT and SURF can be seen as difference of Gaussians with automatic scale (i.e., Gaussian sizes) selection. This, you construct first a scale-space where the input image is filtered at different scales. The scale-space can be seen as a pyramid, where two consecutive images are related by a scale change (i.e., the size of the Gaussian low-pass fiéter has changed), and scales are then grouped by octaves (i.e., a big change in the size of the Gaussian filter).

Since computing the Gaussian scale-space and the histograms of the gradient direction is long, it is a good idea (chosen by the authors of SURF) to replace these computations by fast approximations.

The authors remarked that small Gaussians (like the ones used in SIFT) could be well approximated by square integrals (also known as box blur). These rectangle averages have the nice property to be very fast to obtain thanks to the integral image trick.

Furthermore, the Gaussian scale-space is actually not used per se, but to approximate a Laplacian of Gaussians (you can find this in the SIFT paper). Thus, you do not need just Gaussian-blurred images, but derivatives and differences of them. So, you just push a bit further the idea of approximating a Gaussian by a box: first derive a Gaussian as many times as needed, then approximate each lobe by a box of the correct size. You will eventually end up with a set of Haar features.

This is just an implementation artifact, as you have guessed. The goal is to have a central pixel. The feature descriptor is computed with respect to the center of the image patch to be described.

The first scale is obtained by applying a blur with $\sigma = 1.2$ (or 1.4 in some papers). This is because a natural (real) sharp image can be considered as being the result of the convolution of an ideal (without aliasing) image with a blur kernel of width $\sigma = 1.2$. I can't really remember where it comes from, but it was also explicitly studied in Guoshen Yu's work on A-SIFT, so you might check this page.

In order to identify the potential interest points, difference-of-Gaussian function (DOG) is often used to process the image, thus making it invariant to scale and orientation.

In SIFT, image pyramids are established by filtering each layer with DOG of increasing sigma values and taking the difference.

On the other hand, SURF applies a much faster approximation of second-order Gaussian partial derivatives with Laplacian of Gaussian (LoG) and the square filters of different size (9*9, 15*15, ...). The computational cost is independent of the filter size. There is no down-sampling (change sigma) for higher levels in the pyramid, but only the up-scale of filter size resulting in having images of the same resolution.

One additional note: the authors in your paper further simplify the Gaussian second derivative at the 4 orientations (x,y,xy,yx) with the kernel [1 -2 1], [1 -2 1]', [1 -1;-1 1], and [-1 1;1 -1]. When the filter size increases, you just need to extend the simplified kernel regions to achieve the larger one. And it is equivalent to the DOG with different scales (LoG curve is the same shape as DOG, and the filter size makes their width also equal).

Not the answer you're looking for? Browse other questions tagged image-processing computer-vision multi-scale-analysis or ask your own question.

5
Why Does the Odd Multiple of $ \frac{\pi}{4} $ on Gaussian Cause Loss in Repeatability Under Image Rotations?
0
Is there two Types of Scale Space in SURF algorithm?
10
Auto Detection of Rotation Angle on Arbitrary Image with Orthogonal Features
5
2D Multi Scale Dot Enhancement Filter based on Gaussian Filter and Hessian Matrix
1
SURF normalisation and Haar wavelet