Why a Large Diaphragm Microphone is limited to lesser frequency range 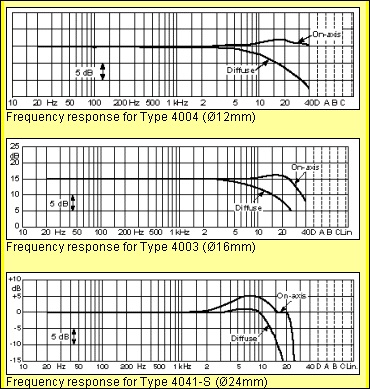 Here Above are the frequency responses of different size microphone(condenser)

what actually is the relation between the microphone capsule size and frequency response ?

The conclusion is that a large diaphragm microphone will have a more limited frequency range than a small diaphragm. This is illustrated in the graphs

i found some sites explaining the reason but i did not get the reason well, can any one illustrate for me plz

There are typically two reasons: First, a larger diaphragm is also heavier and hence it's inertia is bigger, which slows it down at higher frequencies (but also provides for significantly higher max SPL handling).

The main reason, however, is the relationship between wavelength and diaphragm size. The microphone basically "integrates" the sound pressure over the spatial area of the diaphragm. For a plane wave, the sound pressure is the same everywhere, but in a diffuse field that's not the case anymore. The wave length at 10 kHz is about 34 mm. So there are points on the diaphragm that are half a wavelength apart and it's entirely possible that one point sees positive pressure and the other negative pressure. These can cancel each other out (to some extent).