Image Processing - What Is a Gradient Domain?

What is the gradient domain? Does it relate to the Laplace Pyramids?

I found only articles assuming you know what it is and not define it, can someone please define what is it and what it is used for?

The reference used is Seamless Image Stitching in the Gradient Domain

You may want to read this lecture's slides on blending--They also describe Laplace pyramids as another blending tool:

The "gradient domain" is the name often given to a class of processing techniques which operate not on the value of the pixels in images but on differences between the values of neighboring pixels, ie. local spatial transitions.

It means that in the core computations of the algorithm, the image is represented by its first spatial derivatives (horizontal and vertical)--remember the first terms of the Taylor serie of a 1D function $f(x)$ around a point $x_0$, $f(x_0) + (x-x_0) * f'(x_0)$.

For example in the following image, for each pixel inside the white mask the image is not represented by an intensity value, but by a vector of a given direction and norm: 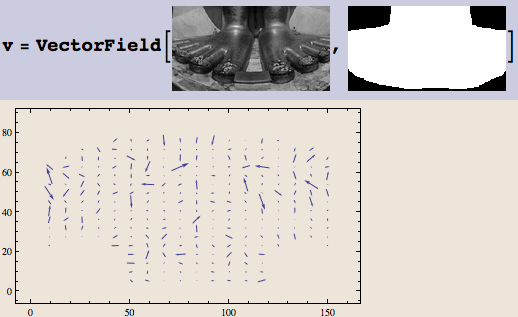 In the context of the stitching paper you mention, the stitched result in the overlapping region consists of a blend of the two original images which tries to respect (that is, be very close to) the observed spatial derivatives in the two images (and not the observed pixel values).

By gradient, in this particular paper, they mean a smooth transition function from one image's content to the other inside $\omega$, the stitch region. This region is the domain of such gradient, meaning the region of space on which it is defined. Therefore $\omega$ region in the gradient domain for a specific stitch.