Reconstruct DWT for each cD1,cD2,cD3 and cA3 signals

This question must be basic for this forum, but I'm only start working with DWT recently, and I was working with CWT before.
I think I can decompose my signal to L level and then get the scalogram with the following scripts.
my question is how can I reconstruct the signal for each details{cD1,cD2,cD3} and approximation CA3? 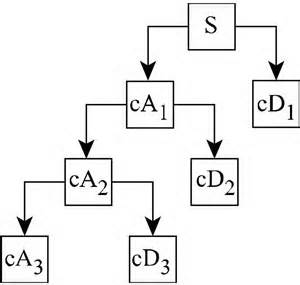 Here is what I have tried so far!

Alright, I'll try to take a shot at giving you an explanation of what's going on with the DWT.

So in the CWT, basically what you are doing is you are generating the wavelet coefficients by convolving the signal with each scale and shift of the mother wavelet function. However, the problem with doing this is that when you analyze the low frequency components of the signal, you are oversampling, or performing the wavelet analysis too often. Also, the relationship between time and frequency localization is much like the relationship between velocity and position localization in quantum mechanics, and when you perform the CWT this inequality is violated for some time/frequency scales. Essentially, with regard to the CWT, the transform is redundant at low frequency scales.

However the DWT doesn't have this problem because the DWT effectively downsamples the signal at each level. The DWT is basically just two filters, a highpass and a lowpass filter. The highpass filter produces the "detail" coefficients, and the lowpass filter produces the "average" coefficients. However, keep in mind that calculating the moving average of a signal is a form of lowpass filtering. Thus when we perform the lowpass filter and get the "average" DWT coefficients, those coefficients are basically just the low frequency components of the signal. And, since we know they are lower in frequency, we know that in the digital case we need less data points to represent a signal lower frequencies. The lowpass and highpass filtering is then repeated for each level of the DWT that can be computed. The level is dependent on the length of the signal. If a signal has $$k$$ data points, where $$k = 2^N$$ then the DWT can be computed to N levels.

To reconstruct the signal, simply apply the inverse DWT for the number of levels which you want to reconstruct.

EDIT: Forgot to mention that the FFT is not needed, you are already filtering based on frequencies.

Not the answer you're looking for? Browse other questions tagged fft frequency-spectrum wavelet reconstruction or ask your own question.

3
Hints and helps to implement an accurate wavelet packet transfrom